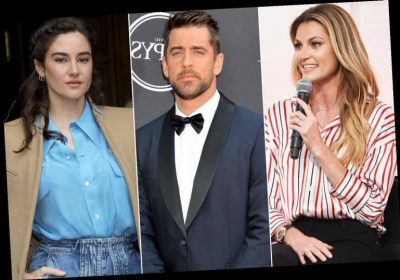 Much like the rest of the world, Erin Andrews was stunned to hear about Aaron Rodgers’ surprise engagement to Shailene Woodley.

“He kept that undercover, wow,” the Fox Sports sideline reporter, 42, said Wednesday when asked about the quarterback’s relationship status during an appearance on Bravo’s “Watch What Happens Live with Andy Cohen.”

“There was kind of rumors, I think, that they were dating, but yeah, I had no idea, and then he unveiled it at his MVP speech, so, surprised everybody, really kept that quiet.”

In early February, reports emerged that Rodgers, 37, had been quietly dating the 29-year-old actress, with a source telling E! News at the time, “They continue to talk and see each other when they can. They are both focused on their careers but they also make time for each other.”

Although rumors of a potential coupling had swirled for some time, Rodgers – who split from longtime girlfriend Danica Patrick in July – confirmed his engagement ahead of Super Bowl 2021, when he received the MVP award during the NFL Honors event.

Later that month, Woodley, who has starred in HBO’s “Big Little Lies” and the “Divergent” series, spoke about her romance with Rodgers during an appearance on the “Tonight Show.”

“For us it’s not new news, so it’s kind of funny everybody right now is freaking out over it,” Woodley said at the time. “We’re like, ‘Yeah we’ve been engaged for a while.’”

Rodgers, who recently wrapped his 16th season with the Packers, has also called fatherhood “the next great challenge.”

As for another quarterback who will soon be adding another ring to his collection, Andrews also spoke about Tom Brady’s boat antics during the Buccaneers’ Super Bowl parade.

“I loved it,” Andrews said of Brady’s boozy day on the water. “I thought, what was so cool about it was he just looked like a little kid… He was walking off the boat with a big smile, it was awesome to see.”

Earlier this month, Brady, 43, told James Corden on the “Late Late Show” that his wobbles were caused by multiple culprits: sea legs and a bit of tequila.