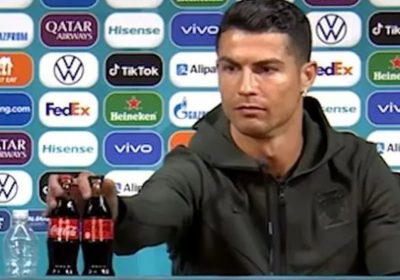 Who would’ve thought a simple gesture from one of the greatest players to ever play the game would turn the focus away from the on-pitch action at Euro 2020.

Cristiano Ronaldo’s seemingly innocent decision to remove two Coca-Cola bottles from the table at a press conference and gentle reminder to “drink water” has sent tournament organisers into a spin.

First, the Portuguese star’s stunt reportedly may have cost Coca-Cola approximately $5.6 billion (NZD) in market value, according to The Athletic, as its share price dipped following the incident.

It was French midfielder Paul Pogba’s turn next to remove a bottle from the press conference desk, as he picked up a bottle of Heineken and moved it out of view. Pogba is of Islamic faith and does not drink alcohol.

Coca-Cola and Heineken are two major partners of the tournament, and football governing body UEFA has finally drawn a line in the sand.

“UEFA has reminded participating teams that partnerships are integral to the delivery of the tournament and to ensuring the development of football across Europe, including for youth and women,” tournament organisers said on Thursday.

It must be noted UEFA has no plans to directly fine any players falling foul over moving sponsored items out of view during press conferences, or in other similar instances.

However, any possible punishments are at the discretion of the national federations.

“We are never fining players directly from the UEFA side, we will do this always through the participating national association and then they could look if they will go further to the player, but we are not going directly for the moment to the player,” Kallen said.

Despite Ronaldo’s decision to inform everyone about what beverage they should be consuming, the Juventus forward has been accused of hypocrisy after footage and photos emerged of his involvement in old Coca-Cola commercials.

Ahead of the 2006 FIFA World Cup, Ronaldo featured in an advertising campaign endorsing the drink company.

Advertisements involving Ronaldo spruiking KFC also resurfaced in the aftermath of his plea for people to drink healthy.

Former teammate Ryan Giggs revealed Ronaldo once arrived at Manchester United training with a Coke bottle in hand, and subsequently copped a spray from the Welsh winger.