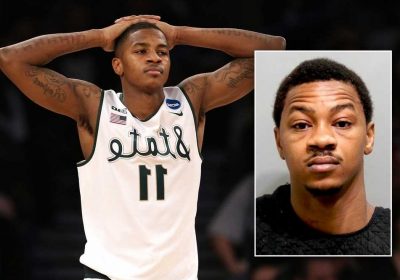 Teen dead after being stabbed more than 20 times while skateboarding

A former Michigan State University basketball star charged with murdering a relative was denied bond this week – as a prosecutor claimed the ex-Spartan has been “spiraling downward” since his days on the hardwood.

Keith Appling — who played for Michigan State from 2010-14, leading the squad in scoring in his junior season — was arraigned Thursday on murder and felony firearm charges in the May 22 shooting death of Clyde Edmonds during a dispute over a gun, the Detroit Free Press reported.

Wayne County Prosecutor Kym Worthy said she considered Appling’s post-professional basketball playing days to be a “tragic” fall for someone with “so much promise, talent and possibility” who is now accused in the “most serious of crimes.”

“It has been clear that this man has been spiraling downward for some time,” Worthy said. “Many of those that tried to intervene with this defendant were hoping that he would get on the right track and stay there.”

Appling, a former McDonald’s All-American, is accused of shooting Edmonds, 66, at a home in Detroit. Edmonds’ wife is the first cousin of Appling’s mother, the Detroit News reported.

The deadly confrontation occurred following a dispute over a handgun, police have said. Appling’s girlfriend, Natalie Brooks Bannister, is also facing charges in the case for allegedly driving him away from the scene and lying to investigators. The ex-MSU star has been ordered not to contact her as the case proceeds, the Free Press reported.

Appling, 29, is also facing separate charges in Jackson County for assault with intent to do bodily harm less than murder and felony firearm in a May 2 incident, court records show.

Thursday’s court appearance marked the latest legal troubles for Appling, who was sentenced to 18 months of probation in December after cops found heroin in his car. He was also ordered to spend a year in jail in 2017 after pleading guilty to carrying a concealed weapon and obstructing a police officer in Wayne County, the Free Press reported.

Appling, who was named Michigan Mr. Basketball in 2010, spent some time in the NBA’s G League and played five games for the Orlando Magic during the 2015-16 season. He most recently played professionally in Italy in 2019, the newspaper reported.

A not guilty plea was entered on Appling’s behalf Thursday. A judge then ordered him held without bond in the Wayne County Jail ahead of his scheduled court date on June 22, according to the report.

Appling’s former coach at Michigan State, Tom Izzo, said he has not spoken with him since his arrest, the Free Press reported Wednesday.

“I’m trying to reserve, trying not to do what the world does and make him guilty until he’s proven it,” said Izzo, who visited Appling in jail in 2017. “And yet, everything I hear, it’s not great.”

The charges facing Appling are “sad,” the coaching legend said.

“I hope and pray to God that it’s not true,” Izzo continued. “But I have no knowledge of anything, except that I was trying to help him get back on track as were more than a few other people.”