Mark Schwarzer and Tony Popovic are confident Australia will advance to the World Cup last 16, but both believe captain Mile Jedinak needs to start each match to give the Socceroos their best chance of qualifying from the group stage.

Just how Socceroos coach Bert van Marwijk lines up on Saturday night against France remains to be seen, but there is strong speculation Jedinak will be squeezed out of the midfield which would hand the captain's armband to Trent Sainsbury. 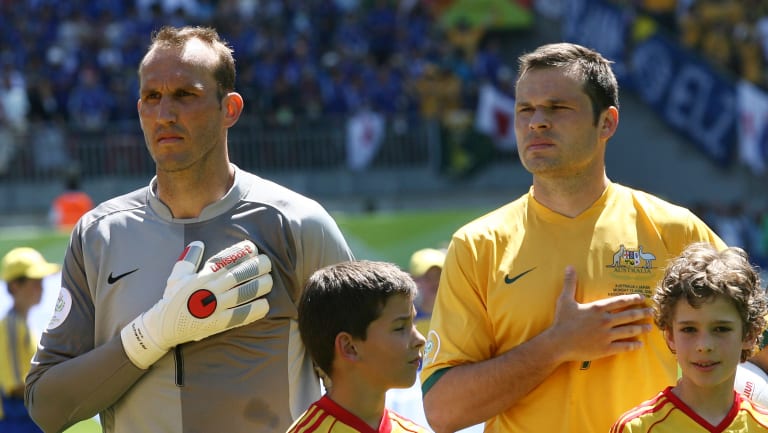 Ex-Socceroos Paul Okon and Mark Bosnich both declared earlier this month that Jedinak should start from the bench, despite captaining the side for half a decade and playing an integral role in the tie against Honduras that secured Australia's qualification.

But speaking at the Dunbar Rovers FC's annual Business of Football lunch, newly appointed Perth Glory coach Popovic said he would pick Jedinak in the starting XI if he was in van Marwijk's shoes.

"Mile should start the first game if he's fit and if he's been training well, his experience, know how in such a big game against a bigger opponent would be beneficial to us ," Popovic said.

"We will need to defend well against France and I believe his positional play, understanding and communication will bring us a lot more value than people anticipate.

"Bert has shown that he's trying different players in different positions. He's got options and as a coach that's a good headache to have."

It's a sentiment strongly shared by 2006 World Cup hero Schwarzer.

"You saw the difference when he [Jedinak] came back and played against Honduras," Schwarzer said.

"People will talk about his three goals in the second leg, I think in the first leg his performance was outstanding. He came back having hardly played any football for six months and to come in at that level, into that pressurised situation, he just controlled the game.

"He brought that stability and that simplicity to the team. I would play him."

Australia's campaign kicks off against heavyweights France at the Kazan Arena on Saturday. Denmark and Peru round out Group C which pits the World No 36 Socceroos against three teams in the top 12 of Fifa's rankings.

Schwarzer predicted earlier this week that Australia would beat France in their World Cup opener, and take a major stride towards the last 16.

"I'm confident we'll get through, and once you get to that knockout stage, anything can happen," Schwarzer said.

"We almost did it against Italy [in 2006]. If they get out of the group, they will grow in confidence, and if you can ride that and continue that that can take you a long long way."

Popovic was less bullish against France but said finishing second in Group C was a realistic goal.

"If we achieve that, then again the next thing becomes possible," Popovic said.

"It's a one off game, it's a knockout format. Once you're at that stage, things can go your way.

"I'm very optimistic that we can get through the group. You can't expect an easy ride but I'm sure the other teams that are facing us, they're looking at us and realising it'll be a tough game.

"That's a belief we always have and we surprised people in that World Cup."