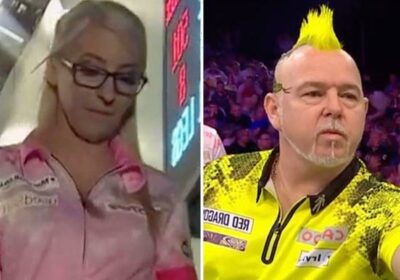 Fallon Sherrock's record-breaking run at the 2021 Grand Slam of Darts came to an end on Saturday evening as Peter Wright secured a battling victory of 16 legs to 13.

The World No 2 survived some early scares to secure his spot in the semi-finals, where he will look to see off Michael Smith to book a clash with Gerwyn Price or James Wade in the final.

Fallon went into the clash as a huge underdog despite her impressive victory over Mensur Suljovic in the second round, a match in which she won by a full five legs.

The 27-year-old, who earned a legion of fans after becoming the first woman to win a match at the PDC World Championships back in 2019, made history again this week.

The Milton Keynes local beat both Mike De Decker and Gabriel Clemens in the group stage following a 5-1 defeat to the aforementioned Snakebite in her tournament opener.

In her knockout victory over Suljovic she hit eight 180s, but her average of just over 90 suggested she might struggle if Wright could recapture some of the form that helped him become World Champion in 2020.

Wright, who lost to Clemens but still managed to win the group, scraped past Jose de Sousa 10-9 in the last round, and will now face Smith after Bully Boy beat Michael van Gerwen.

How far will Fallon get at the 2022 PDC World Championships? Tell us in the comments section Fallon said of the result: "I'm so proud of myself for averaging nearly 100.

"I tried my best and I'm absolutely knackered now."

Fallon secured a record women's TV average with her 5-0 win over De Decker, and became the first woman to ever reach the knockout stages of the competition.

She said before the match: "I’m going into that game thinking if I can take a doubles out, get close to him, maybe it’ll be a different scenario.

"I’m just going to go in like I have been the last couple of games. You know what, I can play like everyone else and I’m going to give you a game.

"I’m not going to just let you run away with it. I go into each game confident I’m going to win."