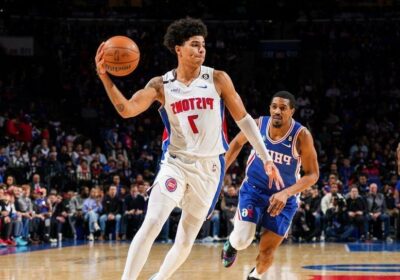 Project Points, Back ‘dogs: Any metric you use will spit out an overwhelming projection when it comes to total points in this Kings-Spurs game: — top-10 pace, bottom-10 defense, etc. You get the idea. In games this season with a projected total of at least 240 points, underdogs are 13-6-2. Embrace some potential chaos with the high point total in this spot!

Following the breadcrumbs: Look at enough numbers and you’re often talked into both sides of any bet. Any bet besides this early Knicks-Pistons game, that is. Try these trends on for size: 12 of the past 18 Pistons games have gone over, three of their past four games against bottom-8 pace teams have gone over, overs are 9-3-1 in the past 14 Knicks games, and overs are 9-1 this season when the Knicks are favored by more than four points. Sheesh. Want to isolate a wager or stack up a SGP? Sportscenter’s Phil Murphy notes that third quarter overs are an insane 16-3-1 in Detroit home games. Pick a thread to pull … they all end up at the same spot!

Game of the night

Breaking down the rest of the slate

Fantasy streamer: Killian Hayes (available in 67.4% of leagues) is a staple in this space because he remains available in more than two-thirds of leagues. He should really be universally rostered at this point. In his six games since the year flipped to 2023, Hayes has averaged 15.5 PPG, 7.8 APG, 2.5 RPG, 2.3 SPG and 2.0 3PG. — Andre Snellings

Best bet: Jalen Brunson over 25.5 points. Brunson has been wielding the blowtorch for the entire year of 2023. For the last few games I’ve expected him to come back down to earth, and he just keeps going bigger. Brunson is averaging 33.3 PPG in the six games since the calendar turned and has been over 25.5 points in five straight. He’s facing a Pistons team that has allowed the second-most points to opposing point guards this season. — Snellings

Fantasy streamer: Anthony Lamb (available in 98.8% of leagues) caught fire while Andrew Wiggins and Stephen Curry were out and hasn’t slowed appreciably since their return. Lamb has scored double-digits in four of his last five games, averaging 16.2 PPG, 4.8 RPG, 2.8 3PG and 2.6 APG in 27.0 MPG over that stretch. Lamb dropped to 24 minutes in his last game, and presumably he’ll lose time eventually with the starter’s return, but he still managed 14 points, 5 boards, 3 3-pointers, 2 steals and 1 block in those 24 minutes and makes a viable streamer candidate on Sunday. — Snellings

Questionable: Kevin Huerter
Ruled Out: Devin Vassell
Note: BPI numbers factored in players who are ruled out but assumes questionable players will play

Best bet: De’Aaron Fox over 6.5 assists. Fox tends to dish either a handful of assists or flirt with double-digits, with little middle ground. In his last nine games, Fox has between 9 and 13 assists in five outings and 5 and 6 assists in the other four. He’s dished nine assists in three of his last four games, and on Sunday faces a Spurs team tied for the seventh-most assists allowed to opposing point guards. —Snellings