Another fantasy football season brings new names to match with old questions. Who to draft? When to select different positions? Can I beat that jerk in Accounting?

Let’s try to answer a few of those.

There are currently deep concerns running back Melvin Gordon could miss games, and maybe the entire season, while he holds out in his final contract year. A growing number of fans fear Ezekiel Elliott’s contract dispute could last beyond Week 1. He is entering his fourth year and is under contract through 2020. Elliott could be fined heavily and potentially gain nothing from not playing since he would still be under contract for two more years. 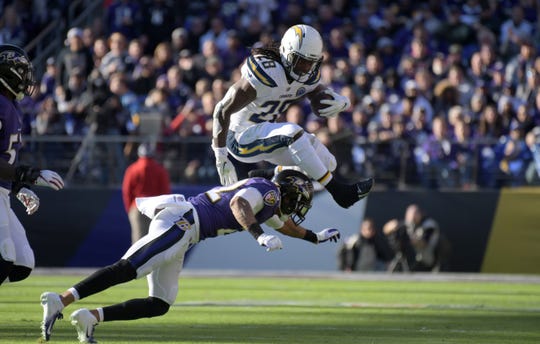 A holdout should give fantasy owners pause when considering Chargers running back Melvin Gordon, who has posted double-digit touchdowns each of the last three seasons. (Photo: Kirby Lee, USA TODAY Sports)

There’s no sense in playing locker-room lawyer with the legalese of NFL contracts. Until Elliott or Gordon show up in camp, let someone else take the risk. Le’Veon Bell raised the bar in 2018 when he silently extended his absence for the entire season, to the great dismay of every fantasy owner everywhere.

There are also a number of players who enter the season with new injuries or are still in the process of recovering from pre-existing health issues. Among them: Andrew Luck, Kenyan Drake, Derrius Guice, Jerick McKinnon, A. J. Green and others. Carefully weigh their pros and cons, and then just draw a line through them on your cheat sheet. You can’t make a bad pick if you never see it.

There are question-mark players like these every season. You are not letting the “deal of a lifetime” pass you by when you choose not to draft someone. You are making a choice between that guy and the next name on your cheat sheet, one that carries almost the same fantasy potential, only with a lot less risk.

If the questionable player ends up producing, then you still made a solid pick and the team drafting after you nets a few more points. But if that player continues to have issues or holds out, then you dodged a bullet that could kill your fantasy fortunes, especially with players taken in the early rounds.

When you weigh health concerns, remember injury-plagued wideout Doug Baldwin, who was drafted as the No. 16 wide receiver last year and finished at No. 46. When you consider holdout players, recall Bell’s infamous no-show. Draw a line through the name, move on to the next.