Cronulla have granted Sosaia Feki permission to negotiate with rival clubs in a move that could free up the money required to sign Aaron Woods before June 30.

It may not be the only player shuffle before the transfer window closes. Penrith is eyeing off Manly's Lloyd Perrett, a shift that would allow young hooker Manase Fainu to take his spot in the Sea Eagles top-30 and belatedly make his NRL debut. 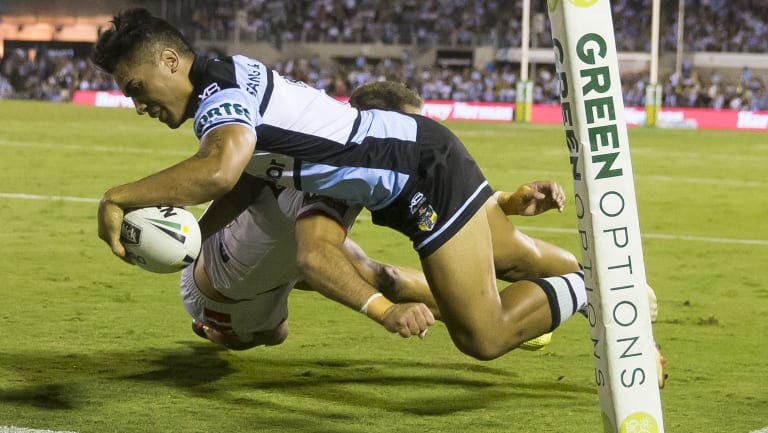 Going? Cronulla winger Sosaia Feki has been given permission to test the water with other clubs.

The transfer window is set to go into overdrive over the next fortnight. The Tigers could be the biggest beneficiaries, with Souths hooker Robbie Farah a big chance of joining long-time Bulldog Moses Mbye at Concord next week.

The Sharks are another club that could be active in the coming weeks. Feki is contracted to the club until the end of next year but is free to leave if he can find a new home before the end of the month.

The Tongan international has made all 117 of his NRL appearances for the Shire outfit but has slipped back in the pecking order behind fellow winger Valentine Holmes, Sione Katoa and Edrick Lee.

Feki has made just eight NRL appearances this season and has again missed the cut for Saturday night’s clash with Manly. A release would give him an opportunity to reignite his NRL career, while freeing up additional funds to throw at Woods. 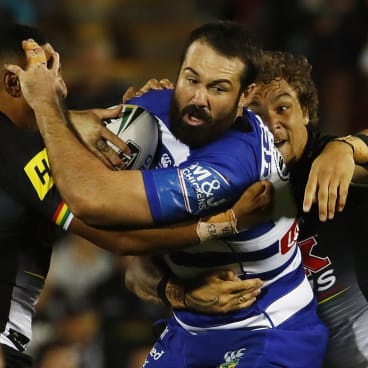 In the doghouse: Aaron Woods’ future is uncertain at Canterbury.

The Bulldogs are prepared to release the former NSW and Australian prop to ease a cap squeeze that won’t allow them to be active in the player market until 2021.

Feki hasn’t officially been granted a release as yet, but the fact he has Cronulla’s blessing to test the market suggests that will occur if there is sufficient interest. The Sharks would prefer the 27-year-old to continue his career in England, but the development will likely pique NRL interest.

Parramatta is in need of at least one quality outside back, a point rammed home when South Sydney ruthlessly exposed the Eels edges in Thursday night’s heavy loss. The blue and golds have been unable to adequately replace Semi Radradra and are on the lookout for someone who can start and finish their sets off strongly.

The Rabbitohs could also be a candidate for Feki’s services. Souths released winger Richie Kennar from the final year of his contract to serve a two-year Mormon mission  starting in 2019. Fellow outside backs Hymel Hunt, Braidon Burns and Robert Jennings remain off contract. Several other clubs could also come into the mix.

Cronulla hasn’t budged from its original offer for Woods, but Feki’s departure would give them more cash to splash. 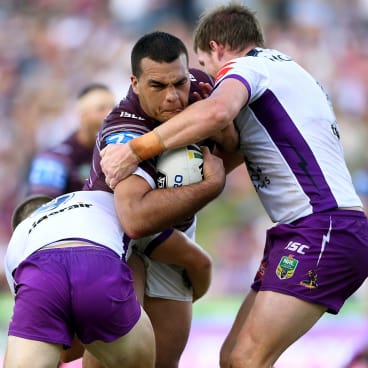 Penrith target: Lloyd Perrett has been linked to the Panthers.

The Sea Eagles have been forced to try to keep their season alive without a specialist hooker, the result of a stand-off with unwanted playmaker Jackson Hastings. The NRL won’t grant youngster Fainu an exemption to make his debut while the likes of Hastings are on the books. The club is hopeful the out-of-favour playmaker will take up an English offer, where Huddersfield appears his most likely destination, but the departure of Perrett could solve the problem regardless.

Perrett remains under contract but the Panthers are looking to bolster a forward pack that has been decimated by injuries. Tim Browne and Peter Wallace have been forced into premature retirement, while Sam McKendry is out for the season after another ACL injury. Moses Leota (pectoral, round 18) and Viliame Kikau (MCL, round 20) are in the injury ward for extended periods.

The Panthers believe Perrett would provide a timely boost in the run to the finals if a release can be negotiated. The 23-year-old  had few opportunities at the Bulldogs after getting stuck behind a star-studded pack of internationals. He has made 27 appearances for the Sea Eagles, taking his career total to 51, but hasn’t been able to crack the starting 17 in recent weeks.