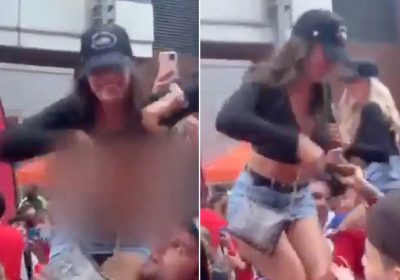 Montreal knows how to have fun.

As Canadiens fans took to the streets to celebrate their favorite team’s Game 4 victory over the Lightning, one excited woman flashed the partying crowd.

The woman was caught on camera committing the act as she was sitting on a man’s shoulders. Fans cheered and shouted “let’s go” as it took place.

The Canadiens avoided elimination on their home rink with a 3-2 overtime victory over Tampa Bay. Canadiens winger Josh Anderson was the hero once again in the extra frame — he now has two overtime winners among his five playoff goals, making him the eighth player in franchise history to score multiple overtime goals in one postseason.