Cronulla coach Shane Flanagan is ready to play the long game on injured veterans Paul Gallen and Luke Lewis as he eyes a return for the pair during the State of Origin period. 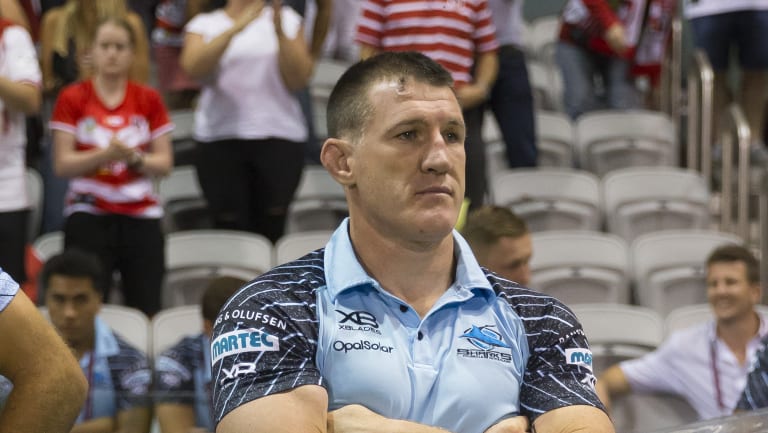 Regularly hampered through the regular season in recent years, the Sharks could have anywhere between one and four players picked for NSW or Queensland duties this year.

The Sharks dropped three of six matches through the period last year, as Flanagan toyed with the idea of resting his representative stars to best manage the side.

But in a rare boost, Flanagan is eying the returns of a fresh Lewis and Gallen, after they were both ruled out for up to another month with calf and knee injuries in the past two weeks.

"At around Origin period I will get two former Origin and Test players coming into my team," Flanagan said.

"Injuries happen and I've got to look at it in one way that I'm going to get Paul Gallen and Luke Lewis coming back into the team in about that Origin period.

"And that's going to be a big bonus."

Gallen was injured in Cronulla's loss to St George Illawarra a fortnight ago, and marked the first time the 36-year-old has spent time on the sideline for the Sharks in almost a year-and-a-half.

Meanwhile, Lewis' blow was the latest in a long run of injuries for the 34-year- old, who missed the start of the season with a foot problem, finished the Dragons game early after a knee clash and then suffered his latest calf complaint against Penrith last week.

"He worked really hard in the off-season and is the ultimate professional. The way he treats his body, looks after himself and recovers. And the way he prepares for football games is just 100 per cent

"But he is getting to that age where he has had a few lower leg injuries, and make sure we don't rush him back when he's not 100 per cent."

Second-rower Wade Graham is considered a near-certainty for NSW in this year's State of Origin series, while he could be joined by Sharks teammates Josh Dugan and even Matt Moylan.

Cronulla winger Valentine Holmes is also an incumbent for Queensland, but could be fighting to keep his spot given Greg Inglis' return from injury and his difficult start to the year.