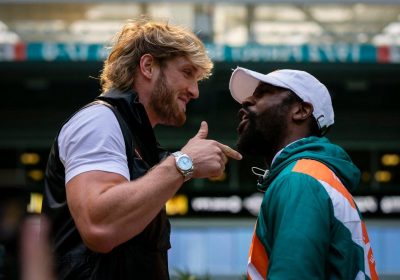 The exhibition showdown between Paul and the dominant Mayweather, who has a perfect 50-0 record, features a strong undercard that will see the return of former-unified world champion Jarrett Hurd against Luis Arias, while Jean Pascal and Badou Jack collide in a world title rematch. Former NFL star wide receiver Chad ‘Ochocinco’ Johnson is set to make his boxing debut against Bare Knuckle FC veteran Brian Maxwell.

Mayweather, a five-weight world champion with the unblemished record will take on Paul, a YouTube sensation with over 20 million subscribers. It feels like a no contest – but Paul is six inches taller, 30lbs heavier and 18-years younger than Mayweather.

A brawl broke out during the pre-fight press conference after Jake Paul, Logan’s younger brother, confronted Mayweather and stole the 44-year-old’s hat to garner attention. Logan was forced to break the two up while members of Mayweather’s security team reportedly punched Jake in the face.

It will be a fascinating contest as the older Paul – defeated by fellow YouTube sensation KSI in November 2019 – shares the ring with a fighter regarded by many as the sport’s greatest pound-for-pound boxer.

The fight is the latest episode in a burgeoning pay-per-view scene where established boxers and fighters take on YouTube celebrities, with the interest being generated by the fighters’ social media networks and respective fanbases.

The clash between Mayweather and Paul is truly the crossover of show business and sport, and Adam Smith, head of boxing development for Sky Sports, said the broadcaster was extremely excited to be showing the blockbuster bout.

“We’ve covered many of Mayweather’s sensational victories over the years, including that fascinating clash with Conor McGregor, and we cannot wait to welcome back a boxing legend who always guarantees showmanship and razor-sharp skills.

“Of course, we know Logan Paul well too having showcased his hugely entertaining YouTube grudge fight with KSI, and he’ll be determined to emerge with his reputation intact from a daunting challenge against the majestic Floyd Mayweather.”

The remarkable bout that pits the boxer with the record for most bouts undefeated by a world champion during a career against a YouTube star takes place on Sunday 6 June. The fight was originally scheduled to take place on 20 February but was postponed due to coronavirus restrictions.