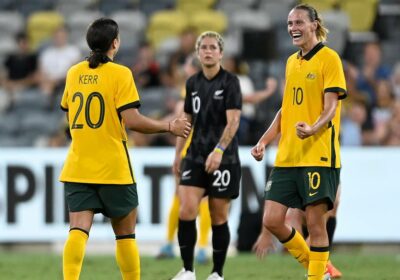 New Zealand had been minutes away from their first transtasman victory in almost three decades, before the amazing finale from the home side.

Emily van Egmond equalised in the 94th minute, before Sam Kerr poked home from a corner with time all but up.

It was cruel on the Ferns, who had hung on grimly, after taking a shock lead in the 32nd minute, though a remarkable long range effort from Anna Green.

The Matildas had 37 shots – including 15 on target – but couldn’t find a way through, with the woodwork saving New Zealand on two occasions, before the late heroics.

In brutal, humid conditions, it was almost a memorable result for the Ferns, whose last win over Australia had come in 1994, though the home side deserved their victory.

History was against New Zealand, and their chances of an unlikely result took a dive in the 15th minute, when they lost midfield lynchpin Ria Percival to a knee injury, after she twisted awkwardly when trying to change direction.

But the template had been set early, with a superb Victoria Esson intervention to deny Hayley Raso. The goalkeeper had a busy first half, with some brilliant saves, while Australia was profligate with several other opportunities.

For long periods it was one way traffic, with the Ferns struggling to clear their lines and maintain possession, before Green’s freakish goal, against the run of play.

A long ball from Meikayla Moore found Green pushing forward, and the defender hit it first time from out wide. It might have been an attempted cross but curled wickedly over Williams and just inside the far post.

It was an unlikely breakthrough, from an unlikely source, as Green had endured a tough first half, with most Australian attacks coming down her flank.

Halftime statistics reflected the dominance of the home side, with 71 per cent possession and a staggering 16-1 shot count.

Esson prevailed again when Raso through on goal just after halftime, before Matildas substitute Caitlin Foord rattled on the crossbar on the hour mark.

Claudia Bunge managed a timely block on Foord, then cleared an Australian attempt off the line, before Kerr headed just over the bar.

Bunge deflected a dangerous cross onto the post, as Australia grew increasingly desperate, while Alanna Kennedy managed an improbable miss from three yards. But Van Egmond finally managed a clinical finish from a precise cross, before Kerr took advantage of confusion in the Ferns box.