Embattled Fremantle senior coach Ross Lyon has remained staunchly silent on whether he was at the centre of a harassment claim made by a junior Dockers staffer.

The Age revealed on Monday a confidential settlement was reached with the junior staffer, understood to be a low five-figure sum,  as a result of an incident at a club Christmas function where Lyon allegedly made inappropriate comments about the woman’s attire. 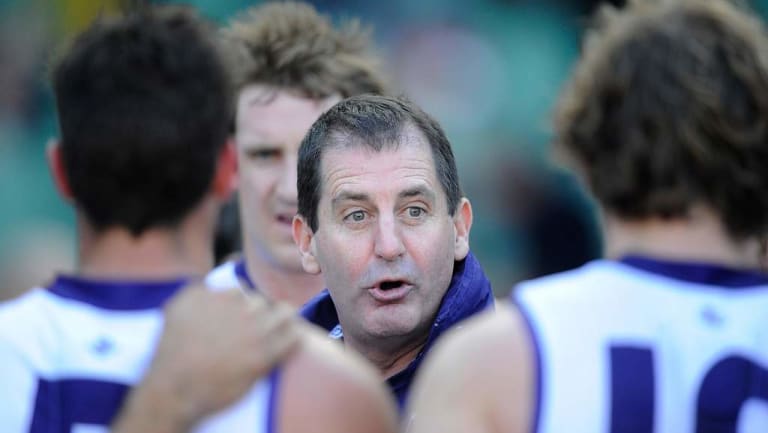 Ross Lyon was probed by the AFL and the club over the alleged harassment.

Lyon, who joined the Dockers in 2012, immediately reported the matter to the club, which investigated and cleared him of wrongdoing.  The AFL's integrity unit also probed Lyon last year and decided to take no further action.

Speaking to 7 News Perth in his contracted segment on Tuesday night, Lyon remained tight-lipped about the allegations.

"Well I can understand there is a lot of interest," Lyon said.

When asked if he was the Fremantle official who had harassed the woman, Lyon said:

"Fundamental to the AFL's Respect and Responsibility policy is privacy for all parties and clearly I need to respect that and I'm not in a position to [answer].

"It was a workplace matter resolved by the club, and the AFL integrity unit investigated it, and there's been no sanction handed down."

Lyon also couldn't say if the confidential nature of the complaint cast unfair aspersions on all male employees at Fremantle.

"Everyone at the club has had the AFL's position statement reiterated, as the club's position has been, to keep the clarity."

It's understood the woman has not worked since leaving the Dockers. She lodged a complaint with WorkCover in early 2017.

Negotiations between the woman's lawyer and the club took several months before a settlement was reached before Christmas. A source close to Lyon said a deal had been struck with the complainant, which required non-disclosure of the agreement.

The woman, understood to have been part of Fremantle's administrative staff, had usually worn casual clothes at the club but on the night had dressed up. It's understood Lyon made a comment about her clothing.

The AFL and Fremantle Football Club insist the matter is closed but league chief executive Gillon McLachlan inadvertently inflamed the issue at a media conference on Friday.

In Perth for the inaugural Western Derby at the new $1.8 billion Optus Stadium, the AFL boss said he was "entirely comfortable with what's happened at Fremantle".

"Our integrity unit has looked at it and ruled out imposing any sanction. Every aspect of the case was looked at … almost immediately when the complaint came to life," McLachlan said.

The AFL chief did not deny the former Dockers employee had received a payment and said the league's updated Respect and Responsibility policy was about "resolving the issue between the complainant and the person who they are making the allegation against".

However, his comments sparked debate and criticism on Saturday that he had endorsed hush money – a point the AFL denied to The Age.

McLachlan had added: "It's entirely appropriate and part of the policy for it to be confidential. There's a wide series of options available for getting resolution. There are many cases that are resolved confidentially.

"That's one of the core tenets of the policy – where possible and where appropriate, the confidentiality remains because it's resolving the issue at hand between the two parties rather than actually being something for public debate.

"I think it's unfortunate when it comes out. Unfortunate for the complainant and the person who is being complained against."

“We want to reiterate what we have said previously on a number of occasions and which has been reinforced by the AFL. This was a work place matter that has been resolved by the club and independently investigated by the AFL's integrity unit at the request of the club, the subject of the complaint and with due respect and care for our former employee," he said.

“With regard to the requested investigation under the AFL’s respect and responsibility policy, the league completed it some months ago to the AFL’s and the club's full satisfaction and no sanction was imposed.

"At the core of the AFL's respect and responsibility policy are guidelines around maintaining and respecting the privacy of all parties, and we will continue to abide by that and will not comment any further.”

The Dockers had not responded to multiple requests for comment by phone, text and email from The Age before the story was published.

The AFL also released a statement, confirming an incident at the Dockers had been "referred to the AFL integrity unit at the request of the club and the subject of complaint".

"The AFL integrity unit investigated the matter in accordance with the league’s respect and responsibility policy. The matter was resolved following an investigation, which ensured privacy and care and provided full transparency for all relevant parties," the statement said.

Amid heightened speculation, Lyon was asked about the incident after the Dockers' round 4 match against Greater Western Sydney in Canberra but would only add: "I’m certainly aware of that and I’m aware that the club and the AFL have released a statement and the whole club will reference that statement and no one’s in a position to comment any further."