From the Archives, 1986: Four more nations boycott Games over apartheid 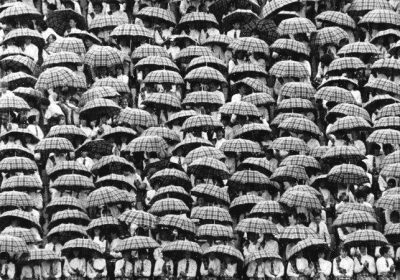 Four more out of Games as Hayden hits at PNG

Four more countries withdrew from the Commonwealth Games yesterday and Australia and Papua New Guinea traded criticisms over the Issue of sanctions on South Africa. 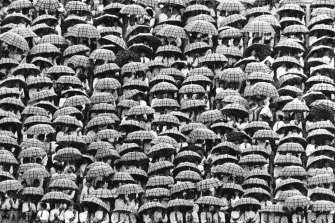 Rain falls during the opening ceremony for the 1986 Commonwealth Games in Edinburgh.Credit:Rick Stevens

This came as a rebel Tory plot to unseat the British Prime Minister, Mrs Thatcher, was being blamed for the row over publication of what are purported to be the Queen’s political views.

India, Sri Lanka, Cyprus and the Seychelles pulled out of the Games yesterday, bringing to 27 the number of countries to have withdrawn.

The Indian team’s chef-de-mission, Salien Kumar Roy, resigned in protest against the boycott and called on the rest of the Indian Olympic Association executive committee to jolt him.

“It is utter nonsense. The politicians should play politics and let us play our own games,” Mr Roy said in New Delhi after submitting his resignation.

The Indian Minister for Sports, Mrs Margaret Alva, met the athletes and told them the Government had been left with no option but to boycott the Games.

India, the largest member of the Commonwealth, was to send a 126-member delegation to the Games, which open in Edinburgh on Thursday. 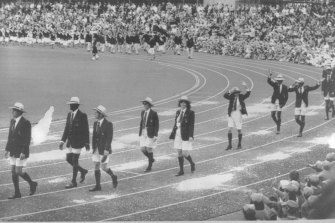 Bermuda takes part in the opening ceremony before announcing they would boycott the Games. Credit:Kenneth Stevens

In COLOMBO, the Sri Lankan Foreign Ministry said it was pulling out of the Games to show its solidarity with the fight against apartheid In South Africa.

In NICOSIA, the Cyprus Commonwealth Games committee said it was following a Government recommendation to express solidarity with other countries protesting against Britain’s failure to approve economic sanctions against Pretoria.

In CANBERRA, the Foreign Minister, Mr Hayden, yesterday hit back at Papua New Guinea over its urging that Australia should join the Commonwealth Games boycott.

Mr Hayden said that unlike Australia, PNG had taken no previous action against South Africa.

He said that in joining the boycott, the PNG Prime Minister, Mr Wingti, was doing “something new for PNG up to this point”.

“Like all novice entrants in an event, there is a presumption that nothing happened before they arrived. Well, I can tell you that a great deal has been happening, and we have been doing a great deal,” Mr Hayden said.

But Mr Wingti said last night that PNG had outlawed dealing with South Africa about 10 years ago.

Mr Wingti said countries in the Commonwealth needed to take appropriate action to indicate to Britain that they were quite strong about the South Africa situation.

“All I stated was that in the Pacific, Australia and New Zealand had a leading role to play. I said that it is no good just talking about it but we need to take some decisive action.”

Mr Hayden again defended Australia’s refusal to join the boycott. He said Australia was not embarrassed about its position — it had given leadership to the rest of the world on the South African issue.

In PORT MORESBY, the Australian high commission said Australia’s record was in “sharp contrast” to the charge of a lack of action against apartheid.

John Stevens reports from London that the “Tory plot” report in ‘The Sunday Times’ plunged the Queen into unprecedented political controversy only two days before the wedding of her son, Prince Andrew, to Sarah Ferguson.

The report quoted Buckingham Palace sources as saying the Queen was dismayed by the Mrs Thatchers ‘uncaring” policies, on South African sanctions and other issues.

The source of the story is unknown and the critical question is whether it was authorised by the Queen. Most MPs and commentators attribute the episode to political mischief-making. For the Queen to make her political view known through a newspaper would be without precedent and perhaps constitutionally questionable. Many today described suck a possibility as unthinkable,

However, despite a vigorous Buckingham Palace denial, some MPs are reported to suspect that the Queen did authorise the leak.

Mr Enoch Powell said he had not the slightest doubt that Tory rebels were behind the story. “It is an inside job,” he said, adding that the operation had backfired.

Mr Powell, a former Cabinet minister and a constitutional expert, said the Queen had never played foul with any of her ministers and he did not believe the hoo-ha which people were putting around for their own interests.

“You might, if you were a dirty dog, try to get you object by suggesting a difference between the sovereign and her ministers,” he said. “But only a dirty dog would do that.”

`The Daily Express’ said Thatcher loyalists were convinced there was a plot to bounce Mrs Thatcher into sanctions against South Africa and even challenge her leadership.

The political reporter of `The Times,′ Nicholas Wood said malcontents within the party are reported to have seized on the rift between Mrs Thicker and the Queen on the South African issue to discredit the Prime Minister.

They hoped they could persuade the party to jettison her in favor of someone more in the tradition of Tory paternalism.

Labor MPs are expected to try to embarrass Mrs Thatcher in the Commons but the Prime Minister is sure to stick to her usual position that contact with the sovereign is confidential.

Mrs Thatcher’s regular weekly audience with the Queen is expected to go ahead, despite mutual embarrassment over the report. On Wednesday Mrs Thatcher will be among the guests at the royal wedding.