Wracked by fear, Daria Gavrilova has laid bare her demons in an extraordinary aftermath to her shattering third-round Wimbledon exit.

Gavrilova confessed to freezing on one of tennis’ biggest stages after a humbling 6-3 6-1 loss to unseeded Serb Aliaksandra Sasnovich. 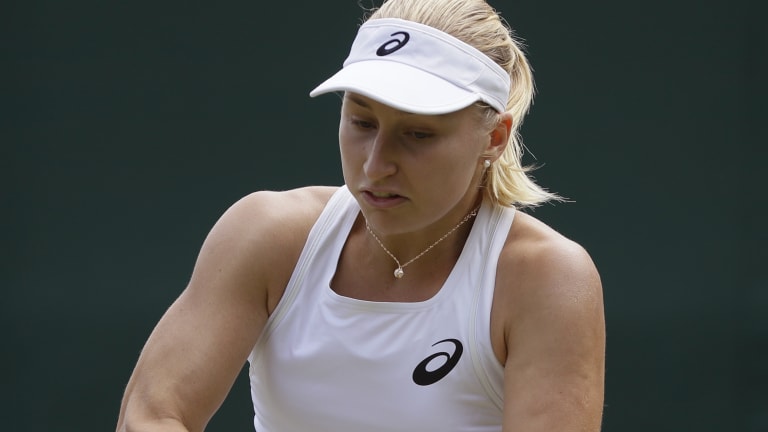 Daria Gavrilova has been knocked out of Wimbledon by an unseeded opponent.

"Mentally I wanted it too much, and I played scared," the Australian said after being undone by 10 double faults on Show Court 18.

"I didn’t go after my shots. Just next time I need to overcome that because clearly playing scared doesn’t win you matches.

"I did a similar thing in Paris, and next time I just have to go after it and, yeah, overcome my fears, I guess."

It was the second straight slam that Gavrilova had stalled in the third round, with the world No.25 admitting she’d taken counselling in a bid to overcome the hoodoo.

Despite it being a seemingly daily occurrence at the slams, choking is rarely admitted and the 23-year-old’s brutal assessment overshadowed what has been an otherwise successful northern summer.

Gavrilova has retained her ranking among the seeded elite and, after a fortnight’s break, will switch her focus to the American hardcourt season, where she will defend her maiden WTA title in New Haven the week before next month’s US Open in New York.

"Actually I’m really motivated. I was already looking at the hard court season and when I’m going to go and where," she said.

"Probably going to go to Russia to see my family and my friends, and then I’m going home for two weeks and just reassess and have a good training block and start the US swing.

Gavrilova’s defeat completed an exodus of Australians on day six of the championships.