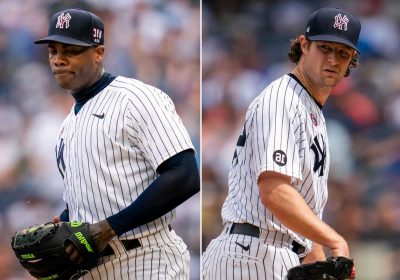 Aroldis Chapman melts down again in Yankees’ loss to Mets

Yankees pitcher at a loss: ‘Don’t really know what else to do’

Good thing for Aroldis Chapman and Gerrit Cole that MLB player voting for the All-Star Game had an early deadline.

On the same day he was selected among the best pitchers in the American League by player voting, Chapman’s remarkable implosion reached new depths as he gave up a home run, did not retire a batter, blew a save and took the loss for the Yankees in the Mets’ 10-5 win to open a doubleheader. Cole’s less-dramatic nosedive continued with a second straight stinker as he squandered his own three-run lead and didn’t make it through the fourth inning.

These are the Yankees’ two best pitchers.

“It’s one of those opportunities that I think every player wants a chance to be part of,” Chapman said pregame through a translator. “To be selected means a lot.”

As shocking as it is to see Chapman joining Cole and fan-voted starting right fielder Aaron Judge as the Yankees’ only All-Stars, it is easy to understand how it happened. No, it’s not a typo. The flame-throwing left-hander converted his first 11 save opportunities and owned a 0.39 ERA with 43 strikeouts in 23 innings through June 6. Opposing batters were hitting just .097 — and they cast their ballots early for Chapman’s sixth career All-Star appearance (three in each league).

“The way I started the season and the performance those months gave me an idea that [selection] could’ve been a possibility,” Chapman said before the game, “but at the same time it’s surprising and nice given that the past couple weeks have been tough for me. It’s great to hear it.”

You can imagine it was less great to hear the vociferous boos — tempered only by some cheering Mets fans — when manager Aaron Boone pulled Chapman after failing to protect a 5-4 lead. He doubled over like he might join heat-exhausted Dylan Bundy as the second pitcher to puke on the Yankee Stadium mound this past week.

Boone — who was hoping Chapman’s struggles could be corrected with a simple mechanical tweak — almost has no choice but to relegate his $16 million-per-year closer to low-pressure situations. Hey, there’s nothing less meaningful than an All-Star exhibition, right?

Chapman has a 20.65 ERA over his last eight games, with batters hitting .482 against him in just 5 ²/₃ innings. Before his Subway Series disaster, he self-destructed against the Twins (four batters faced, four runs scored, two home runs allowed) and the Angels (five batters faced, four runs scored, one home run allowed), blew a save against the Royals and has been bailed out of jams twice since May 21 by triple plays. Not exactly All-Star-worthy despite 16 saves on the résumé.

MLB players and the Commissioner’s Office determined the All-Star pitchers and reserves for both leagues. Cole ranked among the top five in the AL in wins, ERA and strikeouts entering Sunday but he is 2-3 with a 5.24 ERA over six starts since MLB warned of the now-in-effect checks for banned foreign substances on the baseball. He only threw 49 of 80 pitches for strikes against the Mets.

“I’m always humbled because it’s a player vote,” Cole said. “That holds a special place for me. Hopefully we can get back to pitching to that type of level here soon.”