Greater Western Sydney coach Leon Cameron has savaged his team after the club's thrashing by Geelong, describing the performance on Friday night as "basic fundamental tripe".

An angry Cameron, who kept his players behind closed doors for close to 20 minutes after the game, gave the Giants a public dressing down, saying team many believe to be a premiership contender were "not up to A-grade standard". 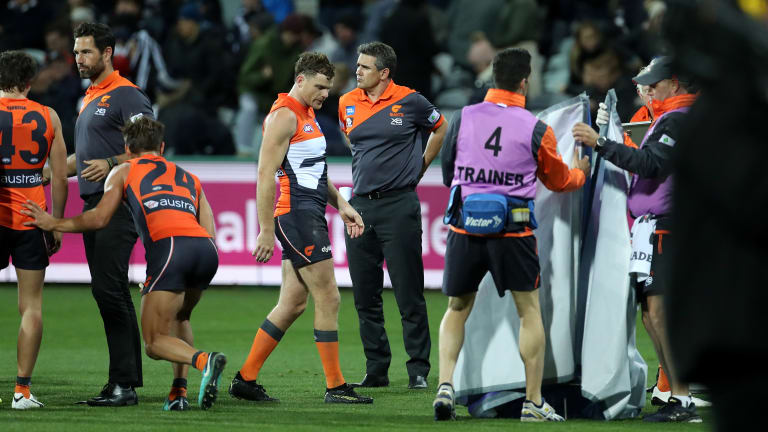 Not happy: Giants coach Leon Cameron, centre, was fuming after his side’s heavy loss to the Cats.

The 61-point drubbing was the Giants' heaviest loss since copping an 89-point pummelling against Sydney in 2015 when the club had yet to reach the finals. It was arguably one of their worst performances since their formative years when inexperience was a legitimate excuse.

The Giants kicked only four goals in near ideal conditions, their score of 32 their lowest score ever. Their leading goalkicker was a defender, Jeremy Finlayson, while number one draft pick Jonathon Patton struggled playing ruck/forward.

"We're not up to A-grade standard, to be totally honest," Cameron said.

"We can't serve up that basic fundamental tripe like that going forward because it's not going to stack up in big games."

The Giants were missing five of their top 10 from last year's best and fairest plus Brett Deledio  but the Cats had notable outs too with champion Gary Ablett, key defensive pair Lachie Henderson and Harry Taylor, half-back Cam Guthrie and goal sneak Daniel Menzel all absent.

Depth, Cameron said, was not an excuse for the Giants' woeful display.

"It was our top end that didn't step up to the plate tonight," Cameron said.

Aside from Nick Haynes and Adam Tomlinson, whom Cameron felt did a decent job negating Sam Menegola, the coach struggled to find any good players in orange.

He was critical of the Giants' ball use, which cracked under Geelong's pressure.

"When you kick at 45 per cent and handball at 67 per cent, that's great pressure from them, but when you do that over 120 minutes its not up to the standard," Cameron said.

"We fell really short in an A-grade game again."'

Cameron said Patton and Heath Shaw were among the senior players who were struggling for form.

Patton took only one contested mark and failed to kick a goal, leaving his tally this year at four after seven games.

Cameron accepted his ruck work had improved but said "he needs to play a helluva lot better forward of the footy".

"Every year since he's had his two knees he's got better and better, but the competition has gotten better," Cameron said. "If you don't move ahead of it you get left behind."

"He went back into his shell, he kicked it really poorly, he was rushed," Cameron said.

"Last week he went at 75 per cent but had three or four really bad clangers but defensively he did a great job on Charlie Cameron.

"Tonight defence was alright but with ball in hand it wasn't great. That's not where it needs to be at, whether it's Heath at the end of his career or Zac Langdon at the other. The only way to deal with it in big games like this is to continue to hit the track hard."