‘Go home to mum crying on Facetime’: Chalmers ready to leave Birmingham behind

Kyle Chalmers is ready to get the first plane out of Birmingham.

“Terrible, terrible,” he replied when asked how he was feeling after Saturday night’s incendiary press conference, where he took media to task about reports of a fractured team and deep rift with Emma McKeon and Cody Simpson. 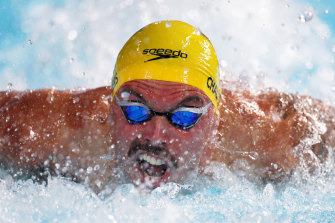 Kyle Chalmers is struggling to focus after a series of controversial stories questioning his relationships within the team.Credit:Getty

“It’s been the hardest 12 hours in my sporting career. Injury, family issues, things like that that can go wrong, it’s in your control. Things like this, it’s out of your control, it’s extremely hard and extremely challenging, especially when you are on the other side of the world and don’t have your direct support network around you.”

Chalmers barely slept after he left the Commonwealth Games pool, where he just piloted the men’s 4x100m freestyle relay to a gold medal and Games record. He didn’t get asked a single question about the race and was quickly taken to task about suggestions he refused to congratulate McKeon, a former love interest who now dates Simpson, for her role in a mixed relay the previous night.

It degenerated into a series of heated exchanges in the media mixed zone as teammates Flynn Southam, Zac Incerti and William Yang watched on in shock. At one point Yang, a team rookie who had just won his first medal, asked if he could excuse himself because nobody had paid him any attention.

Chalmers said he struggled to get out of bed for Sunday’s 100m freestyle heats after having just an hour or two of sleep. He Facetimed his family when he returned to the village and said his mother was in tears. 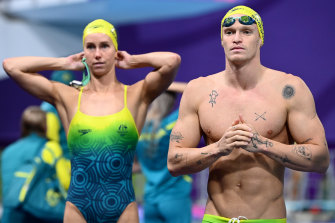 Emma McKeon and Cody Simpson at the pool in Birmingham.Credit:Getty

“For me, it took every little bit of courage to get out of bed this morning and stand on the blocks and race. I want to be on a plane home and be done with it all. It is very, very overwhelming and upsetting,” Chalmers said.

“I don’t want any of this. I love being part of the Australian swimming team. I love standing in front of big crowds and swimming fast. But for me, it’s taking too much of a toll on my mental health.

“It embarrasses me that my grandparents have to read the stuff that gets put in the media, it upsets me that I have to go home to my mum crying on Facetime.

“To have words put in my mouth and false information spread, trying to create cracks on the team … I’ve never had a rivalry with anyone. I get along really well with my rivals, I get along with my teammates.

‘It’s been the hardest 12 hours in my sporting career’

“I don’t want any of that, I don’t feel like I deserve any of that and to be honest with you, it makes me question why I do this sport and where my future lies going forward.”

Chalmers went to great lengths to say how much he admired McKeon, who has become one of the modern greats of the sport, and Simpson, whose celebrity following has drawn countless new eyeballs to swimming as he made his comeback after 10 years in the music business.

“Emma and I are great friends. We’ve been friends since 2015. She inspires me, she has inspired me every step of my career. Cody is another guy I’m inspired by, what he’s managed to achieve in the past two years.

“It’s an honour to share the team with both of them,” Chalmers said.

On top of it all, there is the racing. Chalmers went safely through to the semi-finals but won’t be expected to stop for any further interviews until after the final on Monday night Birmingham time.

Victory, he said, would mean the world given he fell just short in the event on the Gold Coast in 2018. But for the moment, he is an athlete struggling to make sense of his current predicament and one with genuine mental health concerns.

It is that aspect, not his ability in the water, that should be paramount for team officials, coaches and those in his immediate orbit.

Get all the latest news from the Birmingham Commonwealth Games here. We’ll be live blogging the action from 4pm-10am daily.