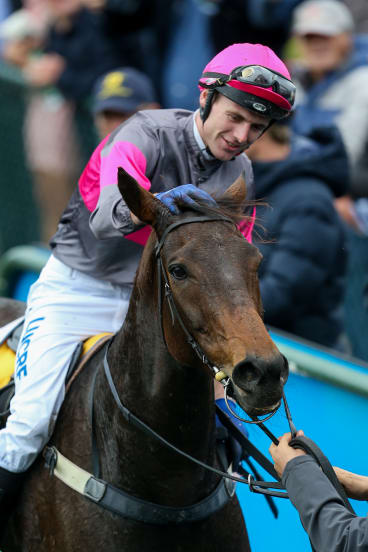 Symon Wilde has fulfilled a lifelong ambition with the victory of Gold Medals in Warrnambool's Grand Annual Steeplechase.

Having lived in Warrnambool all his life, the Grand Annual means more to the 38-year-old than if he was to win a Group 1 race.

Wilde has now won four of the big five races at the three-day carnival, having trained in partnership with his father Bill before going it alone.

Ridden by Clayton Douglas, who was having his first ride in the 5500m marathon, Gold Medals ($7) nudged out the $3.50 favourite Zed Em by a short-head with Spying On You ($41) nine lengths away in third.

Gold Medals won Tuesday's Brierly Steeplechase, becoming the first horse since Frankoo Verymuch in 2005 to win the double, and Wilde said he was under a bit of pressure not to run.

"A few people didn't want to but I was telling everyone I was happy with the horse and backed my judgment," Wilde said.

"If he didn't win I would have left my head on the chopping block but he's got it done.

"I've now won the Cup, the Wangoom, the Brierly and now the Annual.

"I've got the full deck of cards.

"I've watched this race for years and it's a race I've dearly wanted to win, more so than a Group 1."

Douglas, 23, has been coming to Warrnambool since his junior years and now joins his father Vic, a three-time winning training, as a Grand Annual winner.

He only picked up the ride on Wednesday afternoon when Shane Jackson, who won the Brierly on Tuesday, had committed to ride King Of The Forest.

To add salt to the wound, Jackson was fined $1000 for negligence when he failed to cross the finishing line after jumping all 33 obstacles, costing connections $7000 in prizemoney.

He was fined a further $200 for weighing in 1kg overweight.

Douglas was three months old when his father won the Annual with Hoki in 1995.

"To get my own trophy is unbelievable," he said.

"I sat in the bath having a sweat for my light ride earlier and I reckon I watched every Grand Annual race from 1995 to get a good mindset.

"I walked the whole track and knew where I wanted to be and it paid off.

"I was worried about him running out the 5500 metres, so I bided my time, cut all the corners and I didn't want to get there too soon.

"It really worked out good."