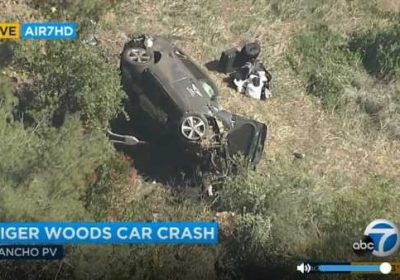 Fellow golf professionals and friends are shocked at the news that golfing great Tiger Woods has been involved in a car crash after rolling his vehicle in Los Angles.

Woods suffered leg injuries and is undergoing surgery, authorities and his manager said. His condition isn’t yet clear.

According to CNN, the 45-year-old suffered moderate to critical injuries. Police said in a statement he had suffered life-threatening injuries.

“I’m sick to my stomach. You know, it hurts to see one of my closest friends get in an accident. Man, I just hope he’s all right. Just worry for his kids, you know. I’m sure they’re struggling,” friend and fellow pro Justin Thomas said.

“He’s our hero out here. You think guys like Tiger and Kobe Bryant are untouchable, but they’re not. I just hope he’s all right.”

“Get well soon, Tiger. You are a true champion!” Trump said,

Woods had to be extricated from the badly damaged vehicle with the “jaws of life” tools, the Los Angeles County Sheriff’s Department said in a statement. No other cars were involved in the wreck that injured the golfer.

“Tiger Woods was in a single-car accident this morning in California where he suffered multiple leg injuries. He is currently in surgery and we thank you for your privacy and support,” Woods’ agent Mark Steinberg said in a statement.

Woods recently had his fifth back surgery and has had a troubled past with painkillers including one incident where police found him asleep at the wheel.

A KABC-TV helicopter over the scene of Woods’ accident showed a car on its side with the front end heavily damaged. Air bags appeared to be deployed. The wreckage appeared to be just off the side of a road on a hillside.

The crash occurred shortly before 7:15am Tuesday, officials said.

Woods was in Los Angeles over the weekend as the tournament host of the Genesis Invitational at Riviera, where he presented the trophy.

“I’m sick to my stomach. You know, it hurts to see one of my closest friends get in an accident. Man, I just hope he’s all right. Just worry for his kids, you know. I’m sure they’re struggling,” friend and fellow pro Justin Thomas said.

“He’s our hero out here. You think guys like Tiger and Kobe Bryant are untouchable, but they’re not. I just hope he’s all right.”

Earlier in the day, former NBA star Dwyane Wade posted a video on Instagram playing a round of golf with Woods.

Woods appeared in a TV interview earlier this week in which social media followers shared their concerns.

“Just me or did Tiger Woods just look completely zoned out during that interview?” tweeted one golf fan.

“He did not look in a good way it must be said,” said one golf fan. “While he might compete at The Masters, I’d be very surprised if he makes the cut. Looks and sounds like he knows it could be the end now.”

This is the third time Woods has been involved in a car investigation. The most notorious was the early morning after Thanksgiving in 2009, when his SUV ran over a fire hydrant and hit a tree. That was the start of shocking revelations that he had been cheating on his wife with multiple women. Woods lost major corporate sponsorship, went to a rehabilitation clinic in Mississippi and did not return to golf for five months.

In May 2017, Florida police found him asleep behind the wheel of a car parked awkwardly on the side of the road. He was arrested on a DUI charge and said later he had an unexpected reaction to prescription medicine his back pain. Woods later pleaded guilty to reckless driving and checked into a clinic to get help with prescription medication and a sleep disorder.

Earlier this week Woods said he doesn’t know when he will return from a fifth back surgery, and he could not give a definitive answer Sunday when asked if he would be at the Masters.

“God, I hope so,” Woods on the CBS broadcast of the Genesis Invitational.

Woods, at Riviera to hand out the trophy as the tournament host, had a microdiscectomy December 23. It was the fifth surgery on his back, and the first since a procedure to fuse his lower spine in April 2017.

“I’m feeling fine,” Woods said. “I’m a little bit stiff. I have one more MRI scheduled so that we’ll see if the annulus (fibrosus) is scarred over finally and see if I can start doing more activities. But still in the gym, still doing the mundane stuff that you have to do for rehab, the little things before I can start gravitating towards something a little more.”

Woods has not played since he joined 11-year-old Charlie at the PNC Challenge a few days before his surgery.

“I don’t know what the plan is,” he said when asked if he would try to play before the Masters.