Graff set to repay Lees' patience in the Clarendon If there was typical Alan Bell type of two-year-old, Graff, which lines up in Saturday’s Clarendon Stakes at Hawkesbury, would be it.

Kris Lees liked what he saw from the time he looked at the Star Witness colt at the sales, shortly after Bell parted with $200,000 for him. He has lived up to his good looks. The Newcastle trainer just needed to be a bit patient, waiting until April for a debut win at Rosehill on Easter Monday. 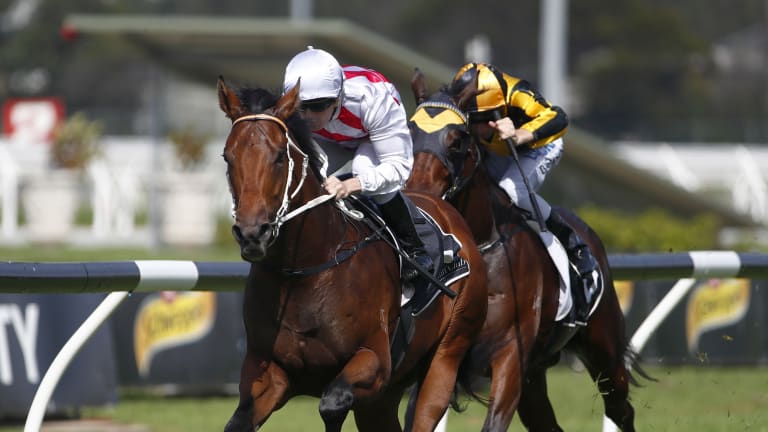 Explosive: Graff races away to win on debut at Rosehill.

“He was always a nice horse. He was a big horse that needed time when we first trialled him in January, so we gave him that and he looks like he is going to reward us,” Lees said. “Alan buys a certain type and he fits it perfectly. It was hard not to like him.

“He looks like he is going to stretch out to a mile and what he did first-up is a sign of his talent.

“I think he is better suited at the 1300 metres rather than the 1100m, that he won at, on Saturday and he is the type of horse that might race on to Brisbane.”

He has had a barrier trial since his debut win to have him at his peak for the listed race for two-year-olds, which has become the springboard for several smart gallopers.

“It was a month between that race and Saturday, so I wanted to keep him up to the mark,” Lees said. “He is a big horse that needs work but has definitely improved from Rosehill and the way he relaxes in his races I’m looking forward to Saturday.”

Graff impressed Kerrin McEvoy in his trial after showing “a sharp turn of foot” on debut.

“He doesn't need to be ridden cold to switch off or anything, he’s a nice relaxed horse. It’s just a matter of teaching him how to go through his gears,” McEvoy said.

Graff is the $3.70 favourite in front of the Chris Waller-trained Orcein at $3.80 with Godolphin’s Stunts blowing to $4.20 in a competitive betting race.

Lees is hoping for some rain to bring Articus into the Hawkesbury Cup later in the afternoon.

“He needs a soft track and we have been promised rain for the past week and it just hasn’t come,” Lees said. “He is going well but a firm track would probably make it hard for him against this style of field.”

Lees will also run Hallelujah Boy to Hawkesbury after he drew wide in Brisbane and thinks he is working towards a win after running fourth in the Provincial Championships Final.

“He was very good at the end of the Provincial Final and I think if they go hard enough he will be in the finish,” he said.