Wade Graham is unlikely to have a final chance to press his State of Origin claims as Cronulla's back-row curse struck down the Kangaroos representative in his comeback game. 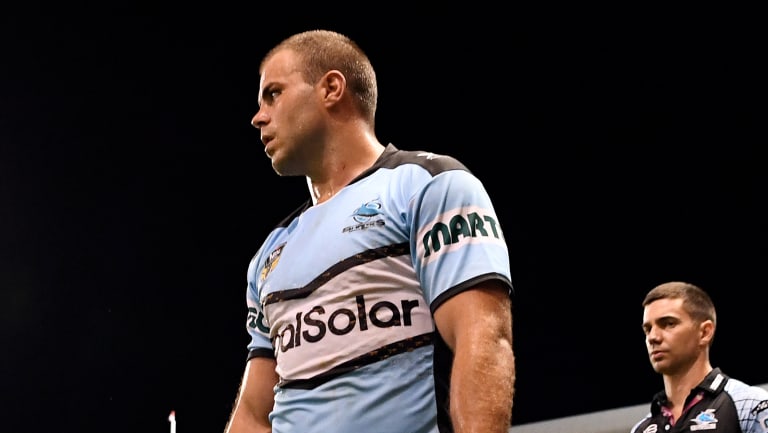 Graham, 27, reaggravated a hamstring injury which sidelined him earlier this season and another minor tear means he's long odds to feature for the Sharks before Brad Fittler names his team for the series opener.

Despite claiming Origin "wasn't on his radar" after Cronulla survived a furious Parramatta rally on Saturday night, the decision might be taken out of his hands after scans on Sunday revealed he has suffered another tear in his hamstring.

It has opened the door for the Dragons' bruising back-rower Tariq Sims to inch closer into contention having starred for the table toppers in the opening two months of the season.

It has raised the prospect of all three St George Illawarra back-rowers in Tyson Frizell, Jack de Belin and Sims forming the nucleus of Fittler's pack against a decimated Queensland forward rotation.

Graham was considered a near certainty in the NSW squad given his ability to cover a number of positions for Fittler and emergence as a Kangaroos staple under Mal Meninga.

But Graham is almost certain to miss Cronulla's clashes against the Raiders and Bulldogs and will be racing to be fit to prove his fitness against the Knights, the same day Fittler and the NSW brains trust will settle on their squad for the Origin opener in Melbourne.

Fittler has already acknowledged Graham's hamstring issue has become a worry as he looks for the right formula to halt Queensland's Origin dynasty.

"Unfortunately, Wade's hamstring scan showed it's back to where it was out two or three weeks ago," Sharks coach Shane Flanagan told Triple M.

"He's probably out for at least two, maybe three weeks – and it probably affects him in Origin as well. We're not having much luck with our back row."

The Sharks have battled with a decimated back row for several weeks with co-captain Paul Gallen and Luke Lewis spending significant time on the sidelines.

Gallen's return for the visit to Canberra could be a timely one with Jayson Bukuya (virus) expected to also fully recover after a stint in hospital during the week.

But Lewis is still considered at least a fortnight away and the Sharks have also lost the impressive Scott Sorensen, who broke his hand against the Eels.