After two days of posturing, the Grand Slam of Darts got serious on Wednesday afternoon with major champions Gary Anderson, Nathan Aspinall and Rob Cross showing their pedigree to avoid defeat and book a place in the second round,

Coming into the afternoon eight players had each won one and lost one of their opening matches which set up an early knockout feel to the tournament. All three title contenders kept their title hopes alive and were joined by debutant Damon Heta in coming through group stage deciders on a dramatic afternoon.

Top spot in the tables was also up for grabs but the drama came in the final four matches when Anderson beat Ryan Searle, Aspinall saw off Ricky Evans and Cross was too strong for Luke Humphries.

Seven spots in the last 16 remain up for grabs when the action continues on Thursday, but Wednesday’s headlines were all made by a trio of names who’ll fancy their chances of going all the way.

Gary Anderson defied a 102 average from Ryan Searle and an injured knee as he booked a place in the second round with an impressive 5-3 win. 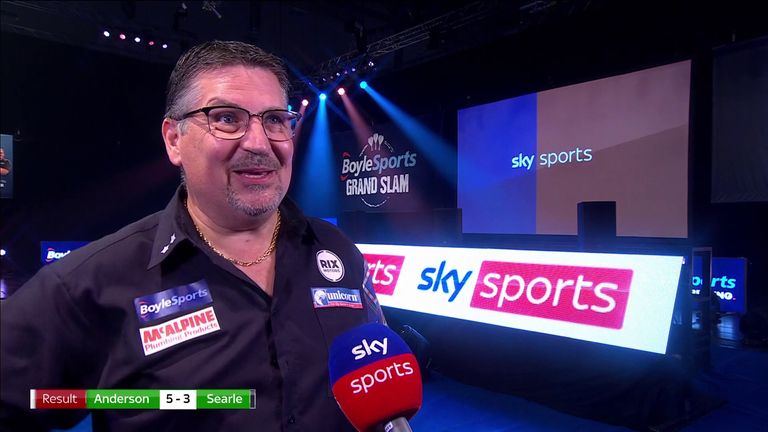 After some controversial comments on day one, the Scot suffered a hammering by Simon Whitlock on day two but returned on Wednesday to produce his best display of the tournament so far.

Anderson produced an average just under 100 himself that included a scintillating 111 finish to start the contest and then defy a surging Searle who stayed alive at 4-3 with a classy 11-dart leg.

But Anderson, runner-up in a controversial final to Gerwyn Price two years ago, had the final say with a 119 check-out on the bullseye before limping to his post-match interview and admitting his knee injury is making life uncomfortable. 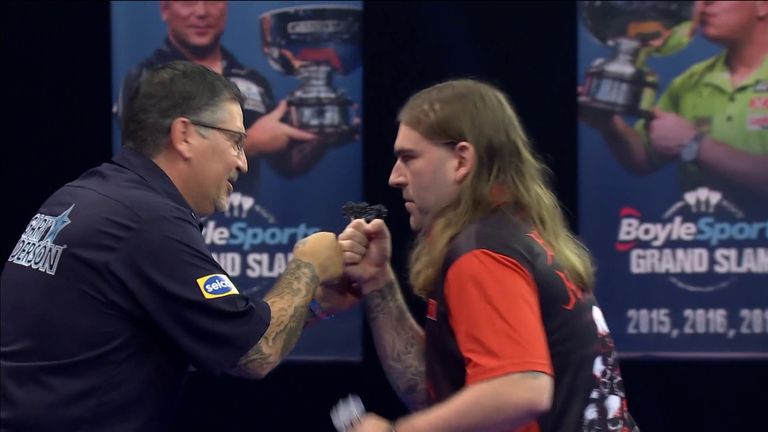 Also in Group B Whitlock fired in seven 180s and fought back from 4-0 to win 5-4 and leave teenager Adam Gawlas winless on his Grand Slam debut.

Victory secured top spot in the group for The Wizard who should avoid a second-round meeting with Michael van Gerwen – the world No 1 who he has beaten at the World Matchplay and the World Grand Prix in the last few months.

Rob Cross has struggled for consistency since lockdown, but he produced arguably his best performance of the last few months to average 100 and end the hopes of world youth champion Luke Humphries with a 5-2 win. 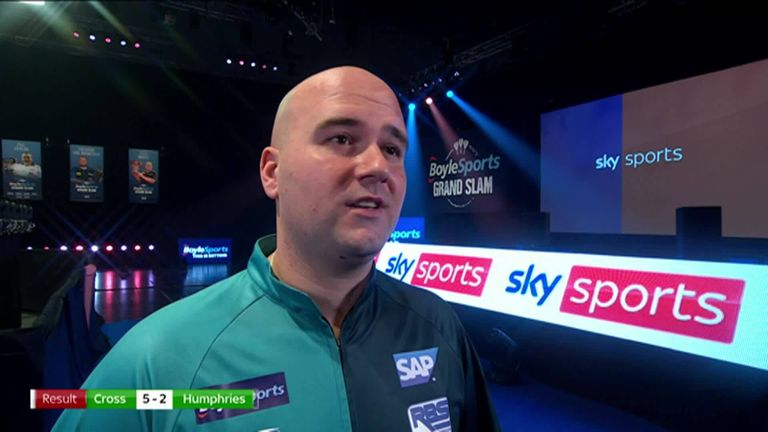 Voltage was eliminated early in the Premier League and has suffered first-round exits during the World Matchplay and World Grand Prix, but showed signs of the form that took him to the European Championship final last month.

Averaging almost 105, Cross stormed into a 3-0 lead. After Humphries stopped the rot to win the fourth, a comeback looked on the cards only for Cool Hand to miss a dart for a 136 check-out that would have drawn him within one of the former world champion.

Cross punished him to move within one of a place in the second round and when more Humphries’ chances went begging, Cross was in ruthless mood to seal his last-16 spot with last dart in hand thanks to double 10.

Also in Group D 2014 runner-up Dave Chisnall maintained his 100 per cent record with a 5-2 over Justin Pipe. That means he will play the runner-up from Group C – likely to be one of Michael Smith, Krzysztof Ratajski or Jose De Sousa.

Before this year Nathan Aspinall had won just one match from his two previous visits to the Grand Slam, but he recorded a second win at this year’s event to beat Ricky Evans and stay alive. 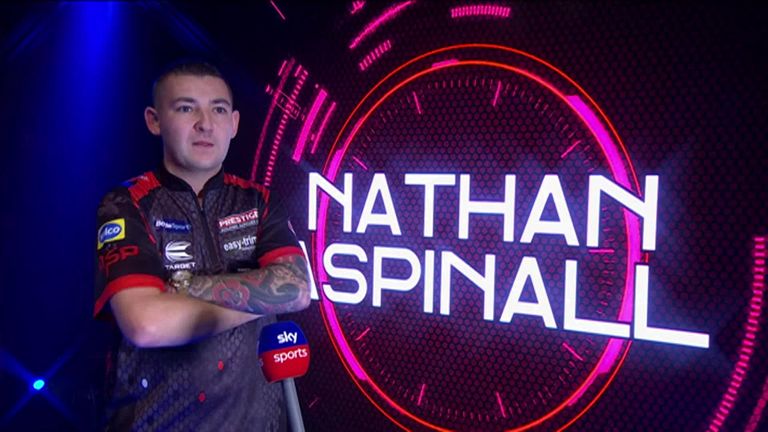 Finishing proved decisive as Aspinall pinned five of his eight darts at the outer ring, in comparison to Evans’ one successful dart at double from 11 attempts.

Evans’ blistering scoring kept him in every leg but Aspinall raced into a 2-0 lead before ‘Rapid’ Ricky finally got on the board and then came close to a nine-dart finish.

But as quick as Evans was throwing, he was wasting chances and Aspinall was in no mood to be denied as he swept through the contest for an impressive 5-1 victory.

Also in Group H, World Matchplay champion Dimitri Van den Bergh produced a third successive 100+ average to beat BDO world champion Wayne Warren – and in the process was the width of a wire away from a nine-dart finish. 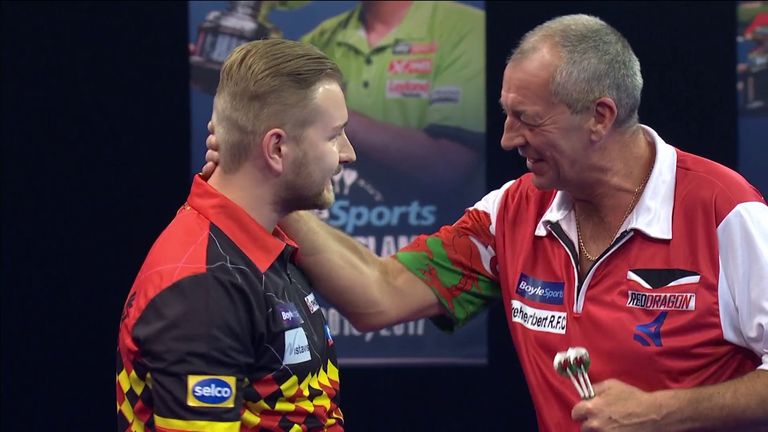 For the second time this week, the Belgian fired eight perfect darts, only to fall agonisingly short from repeating the feat he produced in the Grand Slam in 2018.

Jermaine Wattimena and Damon Heta recovered from a slow start to produce a thrilling contest in the race to join James Wade in qualifying from Group F – but it was Heta who prevailed in a last-leg decider.

Two-time runner-up Wade secured top spot with a routine 5-2 win over an out-of-sorts Glen Durrant who heads home without a win and with just four legs won from the three matches played.

Duzza returned last week after testing positive for coronavirus and has admitted to lacking confidence and energy but has vowed to get back to his best for the remainder of the season.

Don’t miss a dart from the Grand Slam of Darts on Sky Sports as the action continues on Wednesday – join us from 3pm on Sky Sports Arena and follow us @SkySportsDarts for updates and clips throughout the tournament.