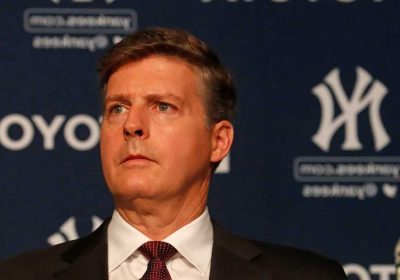 Why Yankees should be open to trading Aaron Judge: Sherman

How I know Jacob deGrom belongs in the greatest-ever conversation: Sherman

At some point, we are going to stop asking, “What would George do?” right?

What he would do — in his heyday — was often impetuous, mean and stupid. You can conveniently forget that when he was suspended in 1990, Steinbrenner was so despised by his fan base that the Yankee Stadium crowd greeted news of the ban with a standing ovation. You can ignore that suspension permitted the patience for the cornerstones of a dynasty to form in his absence and that stability in manager and front office served his later ownership years well. You can whitewash that if you overlay his leadership behavior from then to now, he almost certainly would be suspended a record third time for the kind of workplace cruelty no longer tolerated.

If you believe George would scream or fire or harangue these Yankees into better play, you have watched one too many Yankeeographies. As Hal Steinbrenner noted, “What is often forgotten (about all the various firings) is they often didn’t work. And oftentimes he was criticized for it.”

That Hal should be more like his father works as a sound bite — usually authored by someone who never actually spent time around the relentless irrationality of George. Hal should not be his father. Yet, the son can do better.

Hal took questions on a teleconference with reporters Thursday about his fourth-place underachievers and did not distinguish himself:

— He mentioned injuries as detracting from what the organization believed was a championship-caliber team leaving spring training, citing notably Corey Kluber and Luis Severino. But Kluber had made eight starts the previous two seasons, Severino five (including the playoffs) — one combined in 2020. These were wild cards, not foundational pieces. Severino, in fact, was not supposed to be ready until now anyway, so this is like wondering why Santa Claus hasn’t delivered more in August.

— Hal said he would “consider” blowing past the $210 million luxury tax threshold if baseball operations recommended a player that would force such a choice before the July 30 non-waiver trade deadline. Consider? If the owner actually believes this team can still win and baseball operations recommended a difference maker, the Yanks should spend the money.

The Yanks claim to have lost the most during the pandemic, since they derive so much from paid crowds. But that means they took in so much in past years, will again in future years and yet this payroll is commensurate to those from 15 years ago. The answer is not always to spend, but artificially holding the payroll down to avoid paying an often negligible tax for a company this size is bad business. So is worrying about, say, dropping spots in the draft, when the Yanks have shown no great inclination to turn late first-round picks not named Aaron Judge into much of anything for most of the past two decades.

— Hal generally said that himself, Brian Cashman, Aaron Boone and others in leadership have responsibility for the 2021 underachievement. But he put the onus, especially for the subpar hitting and atrocious baserunning, on the players. And on some level, major leaguers should not be this inattentive on the bases, for example.

But putting all these players in one place at one time is not the responsibility of the players. That is Cashman and baseball operations. That is Boone not fighting hard enough against duplications plus lack of baseball IQ and athleticism. That is Hal blessing it all.

Hal insisted he still trusts the architects, instructors and players and so this is yet another double down on this philosophy and that the first half was not the real Yankees. It was clear that Hal does not want to fire employees he rates as superlative due to bad results on one half. Good for him for patience and loyalty. But those should not cloud reality.

For what seems to have been lost with the Yankees is feel. You can see how individually Cashman and his crew can be praised for, say, sticking with Gary Sanchez, turning Gio Gallegos into Luke Voit, buying Gio Urshela for $25,000, turning a half-season of Aroldis Chapman into Gleyber Torres, giving up not much but money for the then reigning NL MVP Giancarlo Stanton. But there is a bit of a Frankenstein monster quality to it; the individual parts make sense. But does it make sense as a team to be so righty, so unathletic, so bulk/muscular to make it more injury prone?

The Yankees speak regularly about finding lanes in opposing orders that fit the individual talents of their relievers. Then they created a lineup that is one big lane. Boone muses about returning to being a long lineup that makes every inning tough. But opposing scouts echo how easy it is to game plan for the Yankees’ lineup because of lack of diversity. Perhaps some of the downturn also was due to sticky stuff, since the lineup is doing better now.

Conversely, was the pitching staff held together by a gooey strategy? Few have performed worse since the June 3 memo that promised greater enforcement of sticky substances than the Yankees. They had the majors’ second-best ERA (3.16) prior to that and 25th best (5.26) since.

The hitters and pitchers did not put themselves together on the Yankee roster. That is Hal Steinbrenner and those he has empowered. Maybe the second half will justify those decisions. But if that fails to occur what will be needed is not a tirade from the old Boss, but a reasonable search to a better path by the newer version.