Jackson Hastings is in line for a rapid NRL recall just a fortnight after being frozen out from the top squad as Manly seek special dispensation from the NRL to hand Moses Suli a club debut to help their decimated squad.

Just a fortnight after Sea Eagles coach Trent Barrett conceded Hastings could be relegated to the Intrust Super Premiership for the rest of the year over differences with the playing group, Hastings will be named in a threadbare 21-man squad for Manly's clash with the Roosters. 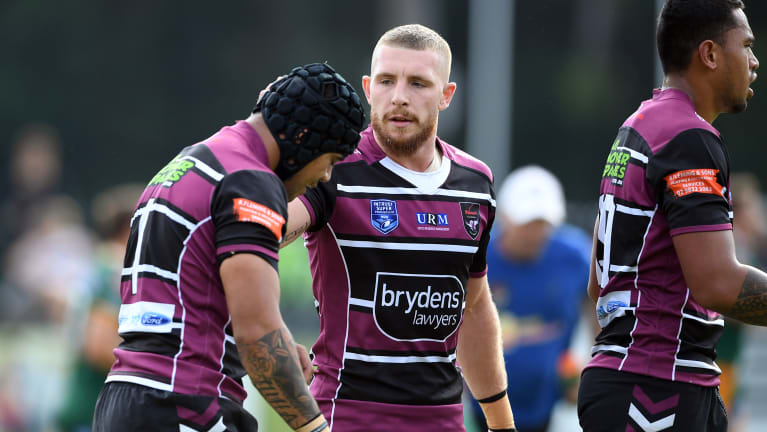 It will cap a swift recall for the 22-year-old playmaker, who has toiled away with Blacktown in the past fortnight but has had the door opened for an NRL return following five-eighth Lachlan Croker's season-ending knee injury on Friday night.

Whether Hastings is included in Barrett's final 17 remains to be seen, but the coach has already indicated the former Roosters enigma will be part of his extended squad on Tuesday after joking "Mickey Mouse" would be considered for selection following Croker's injury.

Hastings has maintained he hadn't given up hope of an NRL recall with Manly despite the Sea Eagles giving the nod to his management to seek another contract elsewhere – and his wish may be granted.

Uncapped former Holden Cup star Tom Wright, who can play five-eighth, could be a gamble Barrett is willing to take given the Sea Eagles' dire plight, but Hastings' return against his former club in the halves alongside Daly Cherry-Evans would be a story only rugby league could write.

Hastings' demotion came after an altercation with Cherry-Evans following a night out at a Gladstone strip club and followed the former Australian Schoolboy falling out with senior Roosters teammates.

I can tell you now when we name our 21 on Tuesday, Jackson will be in that 21

"I can tell you now when we name our 21 on Tuesday, Jackson will be in that 21," Manly chief executive Lyall Gorman told Triple M. "We can remove that speculation. I discussed that with the coach [on Sunday] morning.

"The coach and the coaching staff will look at who we're playing on Sunday and pick the best 17 for that particular game. That's practice every week. Then we'll get on with the business of playing footy. That's been hard the past couple of weeks.

"We're not far from winning a game of footy and everyone knows what that means, you win on the field and a lot of this stuff goes away."

Suli's first NRL game of the season could be a welcome tonic for the struggling Sea Eagles, who also lost Jack Gosiewski to injury in the loss to the Knights.

Barrett barely has 21 fit players on his official roster to choose from as Manly's season slips away from them only a third of the way through the year.

But Sea Eagles officials are hopeful of having Suli available for NRL selection as soon as this week.

The 19-year-old is at his third NRL club in the last six months after being cut by the Tigers and Bulldogs – less than a month after arriving at Belmore – having failed to meet club standards.

But he has since flourished at Manly after being handed a lifeline by Barrett, and could ease the coach's increasing headaches in the next fortnight.

Suli is only on a development contract at the Sea Eagles and would need special approval from the NRL to feature at Allianz Stadium on Sunday.

Gorman, who conceded the Sea Eagles won't be able to make any major signings for the remainder of 2018 and 2019 without a drastic change in circumstances, denied Barrett has been forced to shoulder the majority of Manly's problems stemming from the Gladstone drama.

"I don’t take it personally," he said. "Trent knows the support he has from me in our club. We talk every day and meet most days."

The Sea Eagles are sweating on being granted leave to appeal their salary cap sanctions, most notably the $330,000 penalty on the salary cap for this year and next.

While it is hoped the NRL appeals committee can hear the case swiftly if Manly are able to appeal, there is no guarantee it will be finalised before June 30 when they have to lodge their 30-man squad to the NRL.