The Diamonds relied heavily on Austin during the Constellation Cup, which was scheduled less than two months before the Super Netball season due to COVID-19 delays. 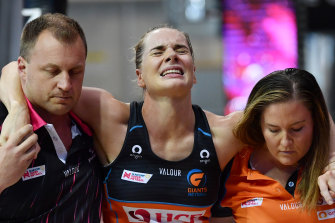 Kiera Austin is helped off the court after her injury.Credit:Getty

″⁣There were a lot of players in that Australian team that had massive loads, I don’t think it is fair to look back and blame it on that,″⁣ Fitzgerald said.

″⁣Yes, she had an up and down pre-season and she was quite ill for a couple of weeks there … but was starting to get back to 100 per cent.″⁣

Austin will undergo scans on Tuesday but Fitzgerald said the club was preparing for the worst. Austin hit the floor in agony while clutching her knee and had to be helped from the court by Giants staff.

Despite the Giants managing to take home a 66-52 win in front of a near-capacity crowd in Adelaide, Fitzgerald said the team was devastated by the injury to their star player.

“Everyone in the stadium realised that we weren’t in a good place and then our physio took her straight back into the change room and they did the test there and it seemed pretty negative,” Fitzgerald said.

“Everyone was deeply upset and Kiera has some very close friends in the team and no one wants to see a player in that much distress. It was quite heartbreaking.“

Fitzgerald said Austin will remain with the Giants for the rest of the season in a back-room capacity and is hoping to return in time for the Commonwealth Games in 2022 – for which she would be a certain starter. The injury will elevate the career of Sophie Dwyer, who will now come into the starting seven.

“This week will be all about working out what we will do in the future now assuming that we won’t have her for the rest of year,” Fitzgerald said.