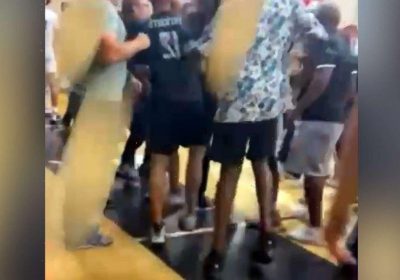 A high school basketball coach in California has been fired after tortillas were thrown at the team’s predominantly Hispanic opponents after a championship game.

Coronado’s head basketball coach, JD Laaperi, was fired after a 5-0 vote by the Coronado Unified School Board during an emergency meeting on Tuesday night, a district representative told ABC News.

After the incident, Laaperi issued a statement on Twitter saying, in part, “Unfortunately a community member brought tortillas and distributed them which was unacceptable and racist in nature.”

During the Tuesday meeting, school and community members made public comments to the board, condemning the attack.

“None of the players were aware tortillas were brought to the game. The tortillas were brought by someone not associated with the team,” said Wayne McKinney, the team’s captain. “However, the throwing of the tortillas during the scuffle after the game was unsportsmanlike and inexcusable. On behalf of the team, we apologize for that action. I think many people are making Saturday out to be something that it was not.”

Parents also shared their grievances, including Yousef Miller, who said: “Bringing tortillas was racism, plain and simple. We don’t need to send these kids to jail. The people behind it need to be investigated and we need to find out who did it. The environment that allowed this to survive is Coronado. There were issues before Saturday.”

CUSD Superintendent Karl Mueller denounced the incident in which “members of our community were involved in an altercation and unsportsmanlike conduct, which included throwing tortillas at our visitors from Orange Glen” as “reprehensible.”

“We cannot allow anyone in our community to be made to feel unwelcome and we send our deep and sincere apology to the Orange Glen community,” Mueller said in a statement on Sunday.

Mueller said in another statement on Tuesday that the district has “initiated immediate action” to address the incident and is working with the Escondido Union High School District to “coordinate experiences which bring students together to facilitate restorative meetings designed to learn and heal from the incident.”

The board told ABC News it has no further comment and the investigation is ongoing.

The California Interscholastic Federation also is investigating the incident.

Community activists demanded action after the incident, including the NAACP San Diego Branch, which requested that Coronado share the CIF Title with Orange Glen or be stripped of the regional title, among other measures.

“The distasteful act of tortilla throwing at a basketball game uncovers deep social inequities that are fueled by racism,” the organization said in a statement. “Coronado must stop turning a blind eye to racial microaggressions and, in this case, macroaggressions that continue to traumatize students of color within the district and throughout the county.”