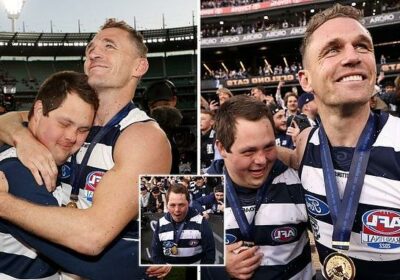 Long-time Geelong water boy Sam Moorfoot was lifted over the fence by skipper Joel Selwood to celebrate with the team on the MCG in heart-warming scenes.

The Cats won as much praise for their grace in victory than they did for their 81-point thrashing over the Swans in the grand final on Saturday afternoon.

Players lingered on the hallowed MCG turf soaking up the atmosphere for some time after the final siren, before Selwood spotted an ecstatic Moorfoot on the boundary fence.

Selwood, who the water boy describes as his ‘best friend’, insisted Moorfoot join in the celebrations, dragging him over the fence and onto the field with the help of teammate Jeremy Cameron.

The 29-year-old, who has Down syndrome, was then given Cameron’s medal; eliciting one of the biggest smiles you are ever likely to see on a footy field. 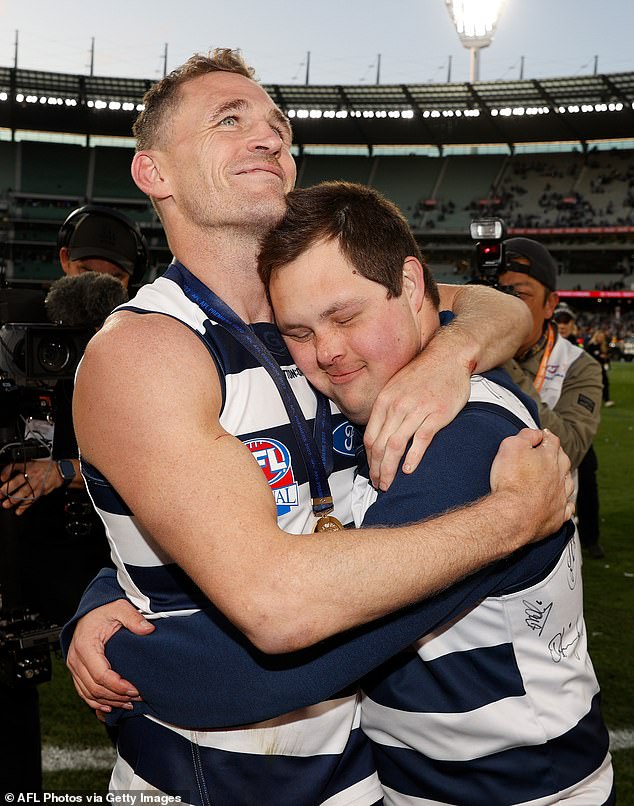 Moorfoot gleefully raised his medal to the fellow Cats fans watching from the fence, much to the delight of Geelong players and supporters; who are all well aware of the huge role he plays keeping up team morale.

He’s been involved with the club since 2015, originally as a volunteer at Kardinia Park’s (now GMHBA Stadium) bistro.

Now the club’s water boy, he can often be seen around the team during the week and on game days. Moorfoot is an iconic figure and much-loved member of the Cats family.

The overjoyed Cats fanatic even made an appearance on Channel 7’s post-match coverage, with commentators Hamish McLachlan and Daisy Pearce interviewing Moorfoot in the changerooms.

‘I’m a training assistant and a water boy, and am very proud of my job,’ he said, when asked what his role was.

Despite having Cats defender Sam De Konig’s arm around him, there was no surprises for guessing his answer to who his favourite player was.

‘Joel Selwood, 100 per cent … Joel is actually my best friend. He is a legend, and he’s just the best,’ Moorfoot said on Channel 7’s post-match coverage. 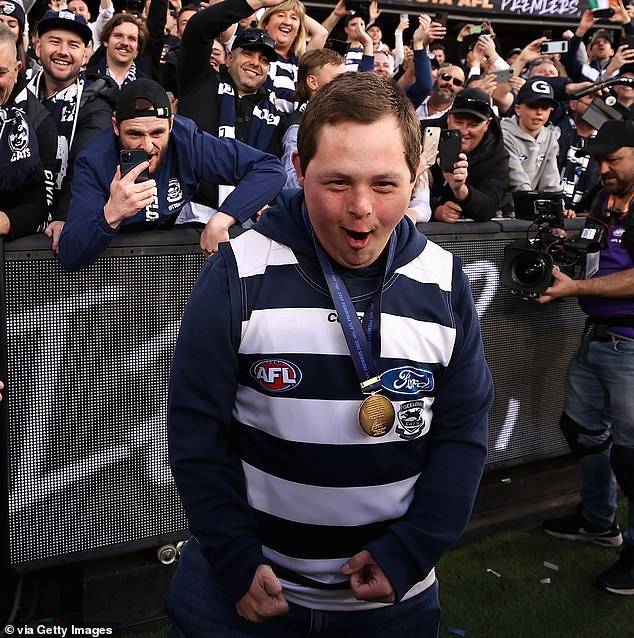 Moorfoot played in a grand final of his own earlier in the year, but his Geelong Dragons unfortunately went down to the Kananook Bulls in the Football Integration Development Association’s big dance.

At the time, Selwood spoke about how close his bond was with Moorfoot.

‘We share a very special friendship, and I consider him like family. He has my back and I have his,’ he told the Age in August. 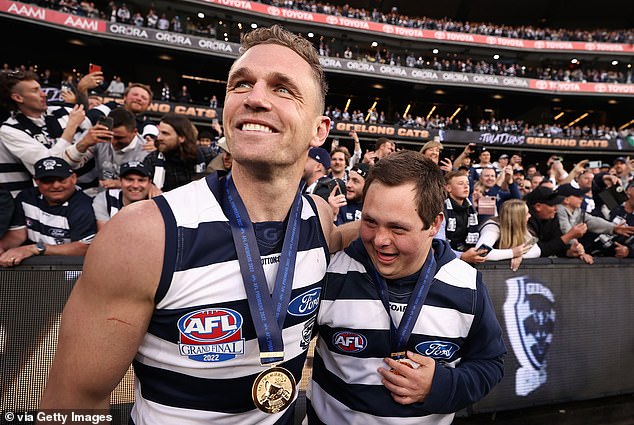 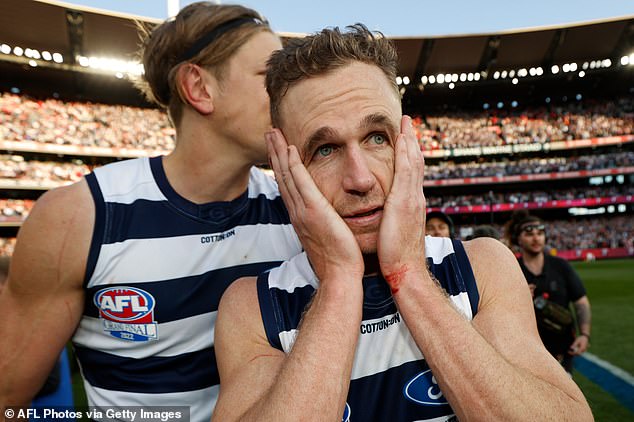 No doubt wearing Jeremy Cameron’s AFL Premiership medal will have dulled that pain over losing his own grand final.

Fans took the social media in droves to shower Selwood, who is the AFL’s Disability Inclusion Ambassador, in praise – and share their joy at viewing the heart-warming scenes.

Chief of which was MP Bill Shorten, currently the Minister for National Disability Insurance Scheme (NDIS).

‘Joel Selwood made a lot of dreams come true yesterday. This could be the sweetest,’ he wrote on Twitter.

It wasn’t Selwood’s only act that sent social media into meltdown.

He led his side through the banner prior to the game with his former teammate Gary Ablett Jr.’s son Levi.

Three-year-old Levi was diagnosed in 2020 with a rare degenerative illness that leaves him with less resistance to naturally fight illnesses compared to healthier children.

Levi was all smiles and waving his arms about gleefully as Selwood carried him through the banner, a touching nod for one of the club’s favourite sons. 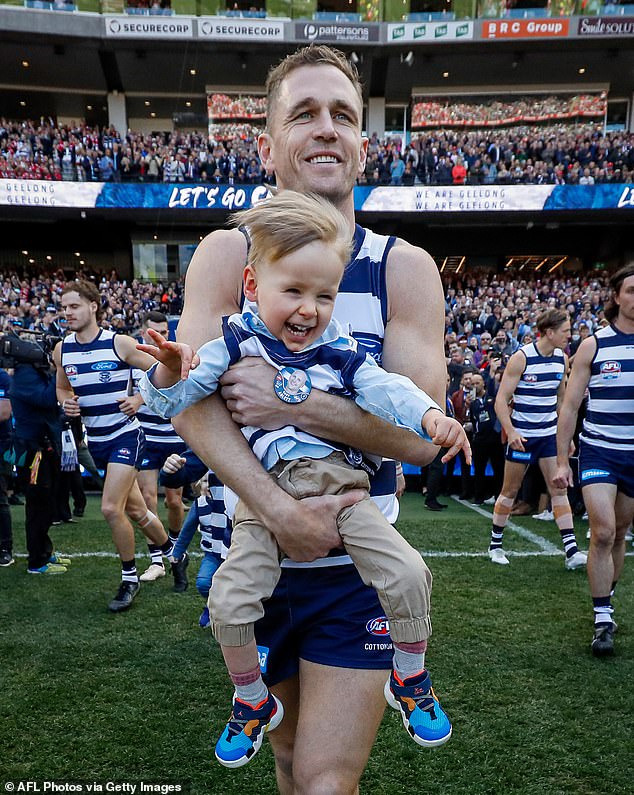 Selwood then delivered Levi back to Ablett, who won two flags with Geelong in his sensational 357-game career.

After the game, the revered skipper not only handed over his grand final cap, as all players do to the pint-sized Auskickers who give them their medals – but his game-worn boots as well.

A thrilled Archie Stockdale, who won the AFL’s Auskicker of the Year award at the Brownlow Medal, had been promised a visit by Selwood – and the Cat did not disappoint.

In emotional scenes atop the presentation stage, Selwood told the elated youngster ‘I told you I was coming to see you’. 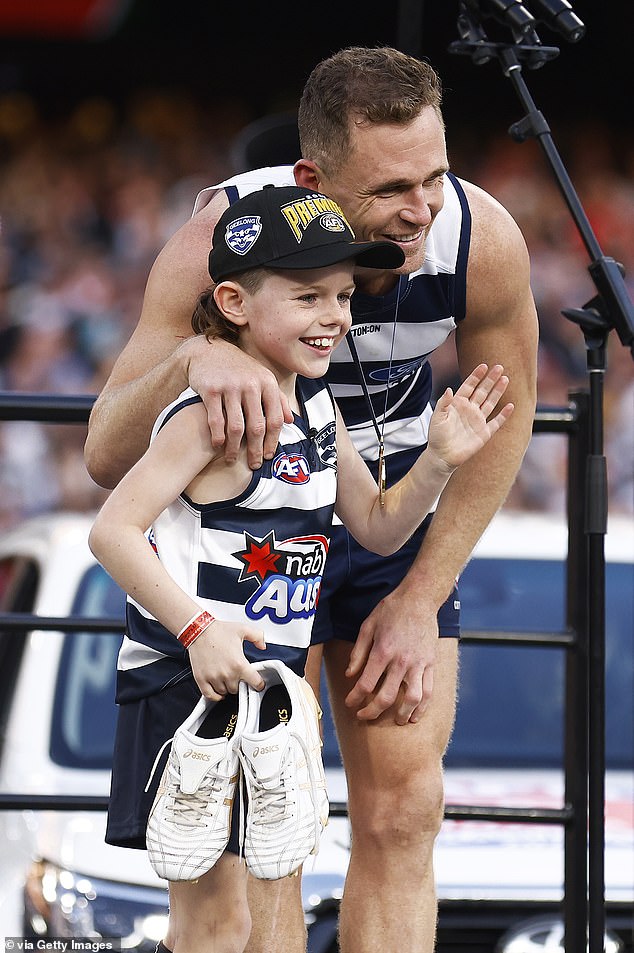 Joel Selwood gave his game boots to Archie Stockdale, the AFL’s Auskicker of the Year, after the game

He then passed on his white boots, and pointed to the camera so the pair could get a photo together – ensuring the memory of a lifetime for little Archie.

Selwood showed more care and attention for those on the periphery than getting caught up in all the emotion and hype of a AFL grand final.

Such grace and humility in victory.