Volleyball Australia has demanded answers as to why Destination NSW pulled $400,000 in funding from a key Olympic lead-up event at Manly, which is now searching for emergency interstate funding or risk being scrapped.

Volleyfest had been a fixture at Manly Beach, with the focal point an FIVB World Beach Volleyball Tour event. It was due to be held in February and shaped as a vital qualification tournament ahead of the Tokyo Games.

That event must now find a new home, potentially in Queensland or WA, but may not proceed at all, costing Australia's beach volleyballers an important home tour event and meaning they must travel overseas to find a similar opportunity. 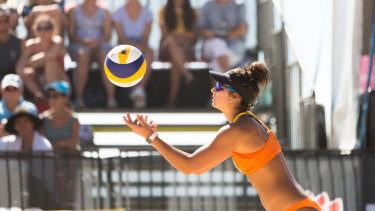 The move has been lambasted by Volleyball Australia, being described as 'myopic' and damaging to the sport. Volleyfest was nominated for the Sport NSW Event of the Year but soon after the funding was cut, with the governing body only informed in October.

"To be advised as late as mid-October that the event, scheduled for February 2020, has no budget is extraordinary and will directly impact on the qualification ambitions of our Olympic teams," said Volleyball Australia president Craig Carracher.

"To be advised now that DNSW support the event but won’t fund it after the event was confirmed as part of the Olympic preparation and qualification program is embarrassing and damaging to Australia."

Carracher said DNSW had been strong supporters of the event in the past and demanded to know the politics behind the decision, saying he wanted some transparency as to how the event funding was allotted.

"The funding agencies must sort themselves out, must set clear transparent priorities and must be accountable for how they allocate tax payers events funding.

"Australia is seeing enough of the contact sports, football codes and professional sports that command billions of dollars in broadcast fees. Tax payers’ funds should provide opportunities for Australia to enjoy hosting a better diet of sports to watch, enjoy and succeed at,” Carracher said.

A spokesperson for DNSW said there was simply no room in the budget for Volleyfest 2020.

"Destination NSW has supported Vollyfest since 2016 as part of a four-year additional funding commitment made by the NSW Government to the agency in 2015, which has now expired.

"Destination NSW has contracted many other events to drive tourism in NSW over the 2019-20 financial year, and unfortunately the investment requested for Volleyfest cannot be accommodated in this year’s events budget."