Home » Sport » In Climbing, Finding a Way Up Is Just One of the Calculations 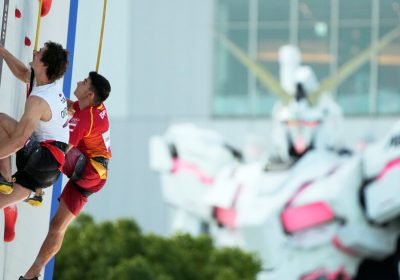 TOKYO — What no one predicted about sport climbing’s debut in the Olympics was just how compelling math can be.

None of the climbers liked that three distinct climbing disciplines — speed, bouldering and lead climbing — were mashed together into one medal event. What they may not have anticipated was the chaos it created in the final moments of competition.

As they were crawling up walls and clinging to holds on a sticky Tokyo summer’s night, using their unique blend of imagination and strength to chart their path and muscle their way upward, they also kept eyes on the scoreboard.

Their ranking in each discipline was multiplied together to give them a final score and to determine who won medals. But with each athlete’s rise on the wall, sometimes with each hold they reached, the numbers shifted in real time and leads changed places. It was an ever-changing leaderboard that shuffled again and again like a flip-number schedule at an old train station.

“I wasn’t doing any math, but I knew I was doing well,” said Nathaniel Coleman of the United States. “I knew big things were possible.”

Adam Ondra of the Czech Republic, widely considered the world’s top climber on both artificial walls and giant rock formations, found himself in the thick of it. After a disappointing sixth-place result in bouldering, he seemed out of contention until he climbed higher than anyone on the lead wall.

That did not put him atop the scoreboard. Only when climbers crawled up the wall, passing the high marks of rivals, were the numbers recalculated. Some rose, some dropped, like a stock-market ticker.

For a moment, as Jakob Schubert of Austria made the competition’s final climb, Ondra jumped to the lead. Then Schubert passed Ondra’s mark, and Ondra’s score fell to sixth place, where history will record his performance.

“It hurts,” Ondra said of not winning a medal. “But it’s hard to be too disappointed.”

When the numbers came to a standstill, 18-year-old Alberto Ginés López of Spain had climbed his way to the gold medal with an unexpected all-around performance. He finished first in speed, seventh in bouldering and fourth in lead, giving him a winning point total of 28 (1×7×4). All three medalists won one of the disciplines, earning the friendly multiplier of one.

Coleman won silver, and Schubert, who barely seemed in the competition until its final moment, lifted himself to bronze.

“Oh my gosh,” Coleman said after saying goodbye on the phone to his mother in Utah, where family and friends gathered to watch on television. “I never dared to acknowledge the dream that I could medal. Just making the finals was my Hail Mary goal.”

Coleman, 24, did not expect to be in the finals just two nights earlier, when his qualification round ended with a mediocre boulder performance and an early slip in lead. Dejected, he congratulated his American teammate Colin Duffy for reaching the finals and said he would be in the audience to cheer him on.

But as the scores shuffled, he found himself in the eighth and final spot in the final. On Thursday he seized first place for a time, only to be passed on the lead wall, and in the lead, by Ginés López.

Tomoa Narasaki of Japan, a powerhouse on the boulder and lead circuits and a surprisingly strong speed climber, finished fourth.

Speed climbing is a vertical sprint up a wall, a test of explosive power and muscle memory. Bouldering is a slow ascent up a short wall without ropes, a feat of dexterity and strength. Lead is the most like outdoor rock climbing, where athletes clip in with a rope and see how high they can get before they are undone by exhaustion, time or a fall.

Ondra’s second-to-last performance in bouldering, out of seven competitors, put him far behind. He went into the final event of lead knowing that only a winning performance might rescue a medal.

It nearly did. He got higher than anyone, as if to prove a point, before Schubert came along. But as Ondra dropped from first to second place in lead, his total score flipped from 24 points to 48 points, knocking him down five places overall.

Ondra had spent most of the past three years devoted to making the Olympics, then competing in them. Unlike a lot of sport climbers, he sees himself as a mountain climber who sometimes competes, not an athlete whose focus is on contests. But few in history have bridged the divide like he has.

The question all along has been whether Ondra needed an Olympic gold medal to validate the mantle of “world’s greatest” bestowed upon him by others.

Ondra has avoided any suggestion that winning first place in an oddly concocted combination event of three distinct disciplines would prove anything, really. But he knew the perception.

He signed up for it, eager for the challenge, if not the win-or-fail mentality attached to it. What would a gold medal mean? Or no medal at all?

Ondra wrestled with those questions, but he focused on the task, as climbers do. He spent most of the past three years training on indoor walls to prepare for the Olympics, for this night.

The pressure was immense. He knew it. He felt it.

“It’s kind of hard because I’ve given so much sacrifice into it, training harder than ever, basically sacrificing rock climbing for two years,” Ondra said. “And now coming back empty-handed without the medals is hard. But at the same time, I know that I couldn’t really have done any better today.”

Climbing was making its Olympic debut, but the format will not be used again. In Paris in 2024, speed will be splintered into its own event, and boulder and lead will be combined into another.

But for the Tokyo Games, climbing’s international federation was told it could have just one event. The Olympics wanted speed — fast-paced, easy to understand, good for television — but the federation knows that speed is a quirky niche, more of a gym sport than anything to do with climbing’s culture of nuance and thoughtful problem solving.

It tried to appease everyone, creating a quirky and temporary combination event. Some compared it to a triathlon. Others said it was like combining three disparate track-and-field events — a sprint, a distance run, maybe a hammer throw.

The unfamiliar combination made it difficult for some to even qualify for the Olympics, including Ondra, who spent parts of three years training in speed, only to see his times plateau. Once qualified, he knew his chances at a medal rested not in speed, where he would finish last or close to it, but in making up for that poor result by winning either boulder and lead, if not both.

In qualifications on Tuesday, Ondra finished 18th among 20 athletes. But he still finished fifth overall, thanks to a third-place finish in boulder and a fourth-place finish in lead. That was good enough to make the final. He needed to do better to win a medal.

Ondra received an unexpected break, however. Bassa Mawem had qualified for the final, thanks largely to his first-place finish in speed, but pulled out of the competition with a biceps injury. That left seven finalists.

In a fluke, Ondra was scheduled to go head-to-head with Mawem in the first round of the speed event. Instead, without Mawem, Ondra got a bye, a free pass to a semifinal heat, ensuring him no worse than a fourth-place finish in speed — half of the 8 that he might have expected to be used to multiply his score.

But the impact rippled through the entire bracket, complicating the usual math. Ginés López was paired against Ondra in the second round, an easier matchup that moved Ginés López to the final against Tomoa Narasaki of Japan, a gold medal favorite and an adept speed climber.

Narasaki slipped at the outset. In hindsight, had Narasaki won that heat, he would have won the gold medal hours later.

It was a near-perfect result for Ondra. He received a multiplier of 4 in the scoring system, and Narasaki, his biggest rival, got a 2. It would have been reasonable to predict a couple of days ago that Ondra would be eighth and Narasaki first, a big difference, maybe too big, in the math of this event.

Ondra had his chance.

Where it came undone for Ondra was in the middle event. Athletes were presented with three boulder problems and given four minutes, separated by a stretch of rest, to solve each one. No one figured out the combination of strength, contortion and imagination to do all three.

But Ondra, a former bouldering world champion, was flummoxed by the second boulder problem, requiring a sort of two-step, running leap to a small hold, then an awkward lift of pure strength toward the top.

The dynamic move did not play to his strength. He separates himself with methodical preciseness, not gymnastics-style explosiveness. Ondra had feared that such a problem could impede his ambition. He also knows that competition climbing appears headed in that direction, leaving his quieter type of climbing behind in another era.

Most could get halfway through the second problem, good for a “zone,” but Ondra could not. He received no points. That left him desperately needing to conquer the third problem, something no one else did.

It was more his style, a sort of inverted sunburst with tiny holds and options for creativity. He figured out a unique way to position his feet, reach one hand under the other. Ondra got closer to the top than anyone before he fell. That did him no good on the scoreboard.

For all the chaos of the numbers, it still came down to gravity, as climbing always does. And Ondra, on this night, fell to Earth.