In Kikuchi vs. Ohtani, Japan Sees Another Great Rivalry The Seattle Mariners and Los Angeles Angels may be duking it out in the cellar of the American League West, but when they begin a four-game series on Thursday in Seattle, the showdown will get October-like coverage in Japan.

Nearly every spot in the Mariners’ 150-seat press box has been assigned — the largest turnout since opening day — and the game will be broadcast live throughout Japan, starting at 10 a.m. Friday with the time difference.

The reason for the hype? Yusei Kikuchi and Shohei Ohtani, who attended the same high school in Japan, could face off for the first time on American soil. Kikuchi, a left-handed pitcher, is scheduled to start Thursday for Seattle, and if Angels Manager Brad Ausmus decides to use Ohtani, his left-handed designated hitter, Japan will go bonkers.

But the nation’s interest is not just in seeing two of its players on the same Major League Baseball diamond. It is also about Japan’s fixation on the nuances of individual rivalries between pitchers and batters, a fascination that underscores how differently fans there view baseball compared with most North Americans.

Japan has long viewed elite pitchers and skilled hitters in tandem. When the pioneering Dodgers ace Hideo Nomo pitched for the Kintestu Buffaloes, it was the hard-swinging Kazuhiro Kiyohara whom most fans wanted to see face him. Mention the home run king Sadaharu Oh, and many Japanese people will fondly recall how Yutaka Enatsu took him on. 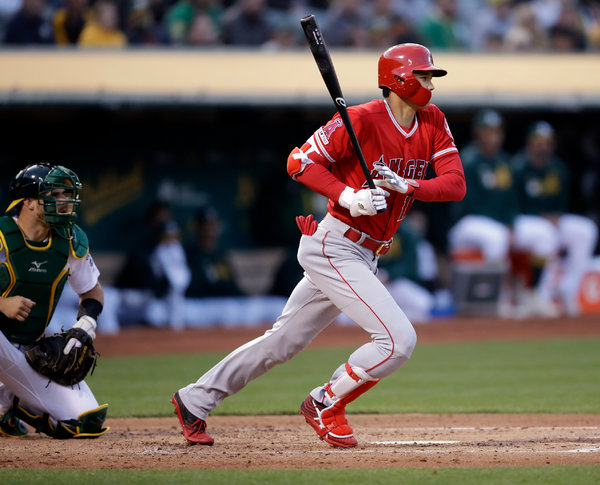 “It wasn’t just great ability that made the legendary matchups of the past: In each case, there was a rivalry or palpable consciousness between the particular pitcher and batter,” Yuta Ishida, a journalist from Tokyo who traveled to Seattle to cover the Mariners-Angels matchup, said in Japanese.

Sure, fans in the United States cherish a handful of pitcher-batter associations, but it is often because of inciting incidents or landmark results: Roger Clemens hurling part of a broken bat at Mike Piazza during the 2000 World Series or Al Downing serving up Hank Aaron’s 715th career home run to break Babe Ruth’s record. But in Japan, where the national sport pits one wrestler against another in a sumo ring, the fascination is with the process and how the one-on-one confrontation evolves.

The Atlanta Braves’ Brian McCann, who caught Masahiro Tanaka with the Yankees from 2014 to 2016, said the questions from Japanese reporters after each Tanaka start were different from those he faced after other pitchers’ starts.

“They would ask about a pitch mid-count, like 1-2, that the hitter took, or why he threw a slider on 0-1,” McCann said. “That would never get asked by American media. They asked more about a pitcher’s condition or the quality of his stuff.”

Perhaps the most-anticipated Japanese matchup in the United States occurred in 2007, when Boston pitcher Daisuke Matsuzaka faced Seattle’s Ichiro Suzuki. It was a rekindling of a brief but memorable rivalry that began eight years earlier in Japan, when an 18-year-old Matsuzaka faced Suzuki, then a five-time Pacific League batting champion, in an encounter that made the pair instantly synonymous.

Matsuzaka, nine months removed from electrifying the nation by pitching a no-hitter in the championship game of the National High School Baseball Tournament, struck out Suzuki three straight times. Many fans can still recall the pitch selection Matsuzaka used to vanquish Suzuki that May day. For those who yearn for more, a pitch-by-pitch description — along with vivid commentary and interviews — is preserved in a book whose title translates to “Ultimate Baseball Theory” in English.

The first at-bat alone consumes six pages. Here is a paraphrased translation of the climax, with the count at 2-2:

“A 94-m.p.h. fastball came up and in, and Ichiro fouled it off. Indeed, Ichiro clearly was waiting for a fastball. Would Matsuzaka challenge him with what he now knew he was waiting for? The answer is yes. Matsuzaka taunted Ichiro with a fastball up and away, a breathtaking 91-m.p.h. fastball that sapped the strength right out of Ichiro’s swing. One can only wonder if Ichiro had been looking for it inside. But whatever he was thinking, he simply wasn’t able to swing with his trademark sharpness. He was left back on his heels.”

Suzuki left for the major leagues in the United States two years later, and Matsuzaka followed in 2007. Among the eagerly anticipated questions the night their rivalry resumed at Boston’s Fenway Park was: Would Matsuzaka start Suzuki off with the fastball he used to vanquish him years earlier? To the consternation of many, he did not. Even Matsuzaka himself was disappointed.

“I almost feel like telling Ichiro-San to smack me on the head,” he confided to a Japanese magazine. “I can’t believe I started him off with a curveball. No matter how much I want to keep him from getting a hit, a first-pitch curveball was not the right way to do it. I’m so angry at myself.”

Lost in the debate was the fact that the curveball dropped in for strike one before Matsuzaka induced Suzuki to ground out.

The Kikuchi-Ohtani rematch is different because they faced each other only twice in Japan: In 2013 Kikuchi struck out Ohtani, a rookie at the time, twice in two at-bats, then struck him out again in 2017, also surrendering two hits, including a double.

As they prepare for a third encounter, Japan has been enthralled by more than just a budding on-field rivalry. In its vertical society, junior-senior relationships are emphasized. Kikuchi, 27, and Ohtani, 24, are both from the rural Iwate Prefecture on Japan’s main island, and both attended Hanamaki Higashi High School. It doesn’t matter that Kikuchi had already turned pro when Ohtani matriculated there; since both are alumni, the fact that Ohtani is kohai (junior) to Kikuchi’s senpai (senior) adds an extra, riveting layer to their evolving relationship.

“It’s almost like the older brother facing the younger brother,” Ishida said, “because they were developed by the same coach at the same high school, so they have the same DNA.”

That DNA now extends to competing in the same division in the major leagues. And since both are under 30 years old and signed to long-term deals, the matchup has the potential to bloom under the microscope for years to come.