Home » Sport » In Paris, Coco Gauff Is Confident, Consistent, and Off to the Quarterfinals

In Paris, Coco Gauff Is Confident, Consistent, and Off to the Quarterfinals 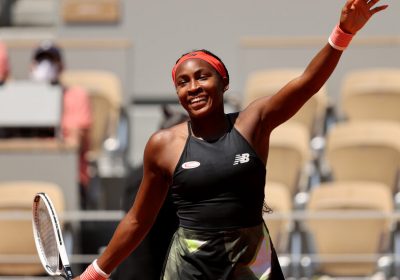 PARIS — It was Coco Gauff’s first appearance on the main stage at the French Open, and it was not the classic Parisian scene she had imagined with fewer than 100 fans in the stands at Court Philippe-Chatrier for the opening matches in this pandemic period of limited crowds.

But Gauff’s performance was dreamy: a resounding 6-3, 6-1 victory in the fourth round over the 25th-seeded Tunisian veteran Ons Jabeur, a drop-shot artiste who, in theory, loves clay more than Gauff and had beaten her on the surface earlier this year.

But Gauff, the gifted American teenager, has shifted into a higher gear since then, improving her consistency and growing more confident after reaching the semifinals of the Italian Open last month and winning both a singles and doubles title in Parma, Italy. You could see the belief in her body language on Monday as she patrolled the red clay, setting a measured pace between points and playing with power, depth and precision once the rallies began.

At age 17, she is into her first Grand Slam quarterfinal and is the last American remaining in singles after Sofia Kenin’s 6-1, 6-3 loss in the fourth round to Maria Sakkari and Sloane Stephens’ 6-2, 6-0 loss to Barbora Krejcikova.

The 24th-seeded Gauff, who will face the unseeded Krejcikova on Wednesday, has not dropped a set in Paris. Against Jabeur, she did not face so much as a break point and made just nine unforced errors and zero double faults.

“Sooner or later, she will win her first Grand Slam title,” Jabeur said.

Such comments, however sincere, can be problematic with young talents like Gauff. Focus too much on what she could do, and it is easy to not fully appreciate what she is doing now.

So, let’s consider what other aspiring tennis stars her age are achieving. No other women’s player under the age of 18 is ranked in the top 300. Gauff is on the verge of breaking into the top 20 and has locked up an Olympics singles spot.

“I just feel this is the most consistent tennis I have played at this level,” Gauff said. “Hopefully I can keep that going.” 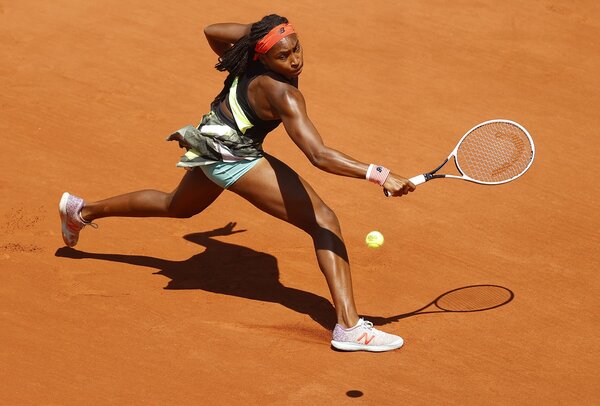 After reaching the fourth round of both her first Wimbledon appearance in 2019 and her first Australian Open in 2020, she has now made the final eight in her second French Open.

She was asked to compare her mind-set during Monday’s match with her previous fourth-round matches at majors.

“To be honest, I think I was just more hungry for it,” she said. “I feel like in the past I felt like I was satisfied with the run I made in the tournament, so maybe I feel like I came into the matches I guess not as hungry, and I know it’s probably not a good thing to say, but it’s the truth. But I think with a lot of young players we tend to get satisfied with just, you know, the small results, not small results but certain results before we realize that we can really shoot for more. My message has always been: Dream big and aim higher.”

Gauff has wanted to be No. 1 with a career like Serena Williams’s since her early teens, but her Wimbledon breakthrough at age 15 did not point her straight to the top.

Her last visit to Roland Garros in September 2020 was a reminder of the difficulty of the challenge. She lost in the second round to the Italian qualifier Martina Trevisan while making 19 double faults.

Gauff has indeed found a better rhythm in recent weeks. “That’s obviously been a hurdle in my game,” she said. “I truly feel like I’m, you know, getting over that hurdle.”

She has also shored up her forehand, cutting down on the errors on that less reliable wing and regularly doing great damage with it in midcourt and in extension. She continues to be comfortable at the net, something her father and coach Corey Gauff has long emphasized.

“I mean at the end of the day, she’s basically a junior in high school,” Corey Gauff said. “And anybody knows in high school you are still developing and learning so there’s a big growth between 15 and 16 and more big growth between 16 and 17. She just has the uniqueness of growing up on tour and on TV, so every time she does something it’s news, and everybody is watching everything she’s doing. But she’s just developing, and she’s developing actually pretty quickly and playing more matches this year compared to 2020, where she played so few matches, is really helping her develop.”

The tour’s five-month hiatus last year was both a burden and a blessing, isolating for a teenager but also a chance to work on improving her weaknesses outside the spotlight. But Corey Gauff said Coco struggled mentally when the tour resumed because of the restrictions.

“This year is better,” Corey Gauff said. “Last year was tough. You could see that it was weighing on her. She was ranked high enough that she was more in the senior hotel, and her friends weren’t in that hotel. And the restrictions were much stricter last year than now. You literally just went to the court and came back and that wasn’t a lot of fun for her. It showed up in her tennis, too. She just wasn’t happy, wasn’t as excited being in the bubbles last year.”

They are back in the same Paris hotel as in last year’s French Open, back to playing the card game Uno in the evenings, but now able to spend an hour outside the bubble daily. Though Coco has not yet been vaccinated, Corey Gauff said he and his wife Candi have been, which alleviates some concern and testing regimens.

“That hour outside the bubble makes a world of difference,” he said.

Candi Gauff was not traveling with her husband and daughter earlier in the clay-court season, but she has joined them for Roland Garros, leaving the Gauffs’s two younger sons at home in Delray Beach, Fla. with grandparents. “It’s nice to have her here,” Coco Gauff said.

Corey Gauff said that Coco benefits from her mother’s presence and also her expertise. Candi Gauff was a hurdler and heptathlete at Florida State.

“She needs her mom,” he said. “Teenage girls need their mother, because those are the ones who help them become young women and help them deal with things and pressures and of course my wife was a world-class athlete, so she understands the pressures and the discipline and preparation and proper nutrition and all the physiology that goes with it. It’s better her mom telling her than her dad telling her.”

Iga Swiatek, the defending champion and eighth seed, remains the rightful favorite in Paris and is in Gauff’s half of the draw. Swiatek beat Gauff en route to the Italian Open title, and they could meet again in the semifinals if Gauff defeats Krejcikova and Swiatek defeats Sakkari.

Whatever happens next at Roland Garros, Gauff is making progress even if she still prefers hardcourts and grass to clay.

“Only thing about clay I don’t like, it’s just whenever you fall you just get all dirty,” she told me.

But there were no tumbles or stumbles on Monday on the most important clay court in the world.