Rohit Sharma and Kuldeep Yadav have inspired India to a crushing eight-wickets win over England in the first one-day international at Trent Bridge.

Vice-captain Rohit hit a wonderful 137 not out after Kuldeep had done the damage with the ball with six wickets, helping India win with 10 overs to spare.

Jos Buttler top-scored for England – who have the chance to level the series at Lord's on Saturday – with 53 but they failed to deal with Kuldeep's spin before toiling in the field. 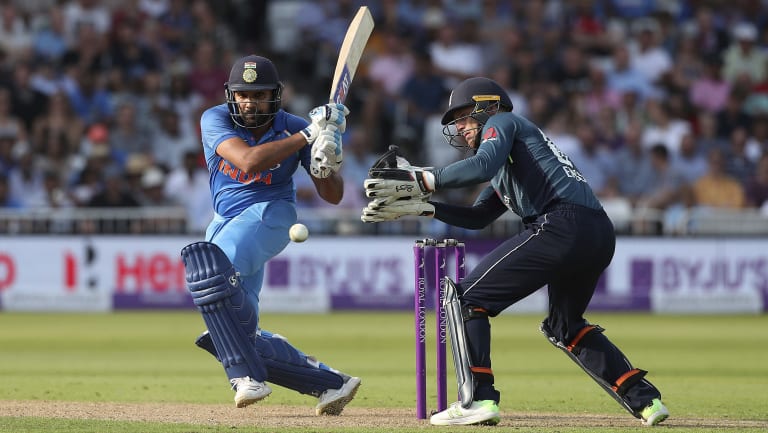 He claimed 6-25 from 10 overs – including 38 dot balls – as England were outclassed and dismissed for 268 having lost the toss and put into bat.

Kuldeep was backed up by the quick-hitting openers before Shikhar Dhawan was caught for 40 by Adil Rashid after horribly mistiming a slog off Moeen Ali.

But it did little to slow India down as they passed 100 with Rohit and Virat Kohli taking on England.

They both reached their half-centuries as India cruised to 169 for one, needing 100 to win from 25 overs.

The devastating Rohit rattled off a century with a stunning six only after seeing Jason Roy drop an extremely difficult chance when the opener was on 92.

Kohli, though, was stumped by Buttler for 75 off Rashid to end the partnership at 167 but it was only a brief respite for England.

Mark Wood's nought for 55 from six overs was costly but Eoin Morgan's side failed to post a competitive total.

England, who had plundered a record 481 in Nottingham against Australia last month, struggled despite an opening stand of 73.

Roy (38) was caught by Umesh Yadav while Bairstow (38) and Root were trapped lbw in the 13th over.

It saw England slip to 82 for three and Morgan (19) walked after bringing up England's 100, giving his wicket away after being caught at midwicket by Suresh Raina off Yuzvendra Chahal.

From then it was slow going as Ben Stokes took 103 balls to make his fifty and Buttler crept to a half-century as the pair rebuild the hosts' innings.

India restricted England to pinching quick runs rather than plundering boundaries – a far cry from when Bairstow and Alex Hales smashed 41 between them against Australia.

And when Kuldeep returned he had Buttler caught behind for 53 thanks to MS Dhoni's impressive reflexes.

Moeen (24) and Rashid (22) helped England to their final total during a late flurry of wickets.