Home » Sport » Ingles' Jazz on the verge of elimination

Ingles' Jazz on the verge of elimination Joe Ingles' Utah Jazz are on the verge of being eliminated from the NBA play-offs after suffering another loss to the Houston Rockets.

The Rockets won 100-87 on Monday (AEST) in Salt Lake City to take a 3-1 lead in the best-of-seven western conference semi-final series. 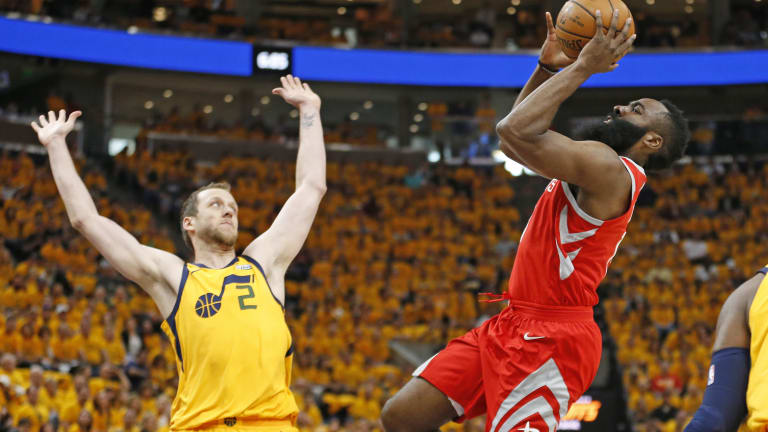 The Rockets can eliminate the Jazz with a win on Wednesday when the series moves back to Houston.

The Rockets' All-Star guards Chris Paul and James Harden had 27 and 24 points respectively.

Ingles had 15 points, eight rebounds and four assists while his rookie guard Donovan Mitchell had 25 points, but contributed to a poor shooting night for the Jazz.

Utah, already without starting point guard Ricky Rubio with a hamstring strain, were hampered further when Australian guard Dante Exum limped off in the third quarter with a similar injury.

Jazz medical staff described the problem as "left hamstring soreness" with Exum contributing nine points in just 10 minutes before his game was brought to an early end.

The Rockets held comfortable leads for much of the game, at one stage 19 points, although the Jazz rallied to cut Houston's lead to 85-80 with six minutes to go in the final period.

The Golden State Warriors matched the Rockets in taking a commanding 3-1 lead in their semi-final series.

The Warriors won 118-92 at the New Orleans Pelicans on the back of Kevin Durant's 38 points and Stephen Curry's 23.

The Warriors had lost by 19 points in game three but were a different team in game four as they stifled the hosts, who shot a paltry 15 per cent from three-point range.

The Pelicans' Anthony Davis had 26 points and 12 rebounds.

The Warriors can eliminate the Pelicans on Wednesday with game five in Oakland.