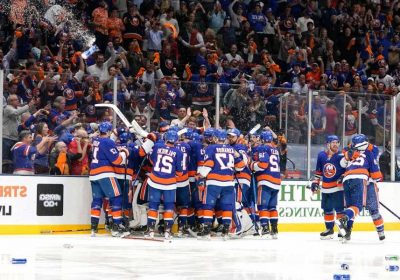 There is precedent for Islanders overcoming humiliating blowout

Nets are reminder nothing is a sure thing

In the moment, you are never sure what to do as a fan. You are never quite certain how to act, and react, how to express the joy bursting inside of you. You are filled with something beyond bliss. In a flash, a wonderful hockey flash, there is a puck slipping behind a stubborn and stingy Tampa Bay Lightning goalie named Andrei Vasilevskiy.

In a flash, rhapsody becomes rapture.

Who was happier, the man who scored the goal — a 24-year-old forward from Sorel-Tracey, Quebec, named Anthony Beauvillier, who until this very moment was mired in a 10-game goal-less skid — or the 12,000 people who’d finagled a ticket for this game, all of them hoping they weren’t attending a funeral for a building?

“I blacked out a little bit,” Beauvillier said of the instant his shot beat Vasilevskiy 68 seconds into overtime, giving the Islanders a thrilling 3-2 win, evening these Stanley Cup semifinals at three games each, securing at least two more days of hockey season, and maybe keeping the moving vans away from The Old Barn a bit longer, too.

The fans, they didn’t black out. They blew the roof off, tried to rattle the foundation, tried to let the roar spill out onto Hempstead Turnpike where maybe it could be heard 10 miles west, in their future home next to Belmont Racetrack. But yelling wasn’t enough. Hugging wouldn’t do. High-fives and foot stomps and primal screams wouldn’t satisfy what they were feeling, so they did what came naturally.

They started tossing stuff on the ice. Mostly it was beer cans. Mostly it looked like a whole lot of half-finished Bud Lite Tall Boys. Maybe it wasn’t the best look. Eddie Olczyk, for one, mentioned on television that the whole scene looked rather dangerous. He wasn’t alone.

They’ll go with it because it was the fans who helped carry them back from the brink Wednesday night. It was the fans who showed up ready to shout themselves hoarse despite the fact that the last time they’d seen the Isles play, on TV Monday night, they were slaughtered by this very same Lightning club. The final was 8-0. Tampa could have named the score.

The fans showed in force anyway Wednesday night. They started chanting and cheering and booing the officials and really letting the Lightning have it.

They sang the national anthem, of course, because what began as a spur-of-the-moment assist a few games back for anthem singer Nicole Raviv when her microphone malfunctioned has now become a phenomenon, and one last tradition to add to the Coliseum archive before they pack up the boxes. And Raviv is now an all-in participant, somehow singing a duet with 12,000 backup singers.

Maybe most vital, despite getting punched twice in the solar plexus early, despite seeing the Lightning race to a 2-0 lead — 12 unanswered goals for Tampa across three games, if you’re keeping score at home — they implored, pleaded, beseeched the Islanders to scratch their way back.

The Islanders scratched their way back.

Jordan Eberle scored on a backhand at 14:22 of the second, at a time when it began to seem Vasilevskiy was going to turn in a Jacob deGrom night in goal. That brought the crowd back to its feet. Then Scott Mayfield snuck one by Vasilevskiy 11:16 into the third, a few beats before desperation was fixing to set in.

That one rattled the walls.

And it seemed to rattle the Lightning. The Islanders killed off a late penalty. They stormed into their dressing room knowing they were a goal away from Game 7. And stormed out and simply fulfilled all the hopes of the faithful begging for one more memory at the Barn. And before anyone could believe it, the puck was in the net, Beauvillier was blacking out, and the fans were on their feet, roaring, bellowing, desperate to find other ways to express their euphoria.

“Going into OT the building smelled like cigarettes,” Beauvillier said with a smile. “Now it smells like beer.”

They left their seats screaming, left the Barn screeching, got into their cars and hit the Northern State Parkway and the Meadowbrook and the L.I.E. flush with the kind of high only a game like this can provide. The Islanders were getting another game. The fans were getting another few days to dream. It’s been a good partnership so far.

And it isn’t over yet. See you Friday night.