Daryl Gibson has reinstated Israel Folau at fullback for the Waratahs' match against the Blues and made it clear he isn’t “buying into that rubbish” that New Zealand’s worst-performing Super Rugby side are going to be an easy proposition.

Five changes have been made to the Waratahs’ starting XV from the side that was thumped by the Lions 29-0 a fortnight ago; a result Gibson said the group was still “seething” over. 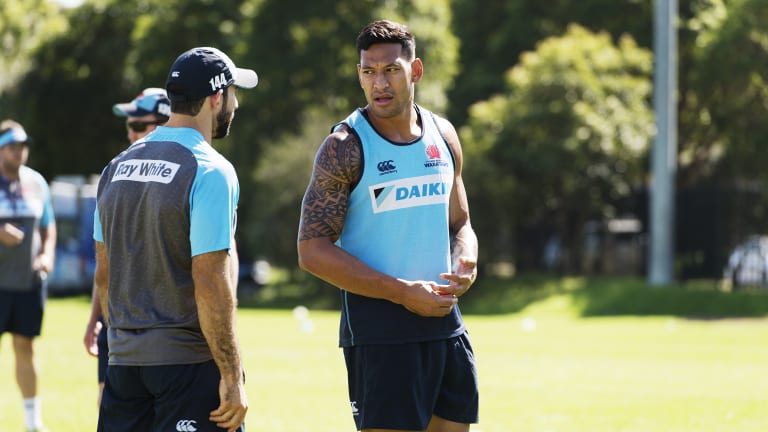 Back: Israel Folau will line-up in the No.15 jersey for the Waratahs against the Blues on Saturday.

Lalakai Foketi has been named at outside-centre for the first time since round five against the Melbourne Rebels, while Cam Clark gets his maiden starting gig this year on the wing.

Will Miller comes into the No.6 jersey and Ned Hanigan shifts to the second row but the big news is the return of Folau from a hamstring injury into his regular position of fullback after a short stint on the wing.

Folau limped off in the fourth minute against the Brumbies in round seven and while it was initially thought his absence would affect the Waratahs, they have won three of their four matches without him.

“We’ve done very well without him but it’s great to have him back,” Gibson told reporters. “He brings a lot [and] a different attacking dimension to us. That four weeks he’s been away, it’s been a good opportunity for him to get his body right and mind back into footy.”

It’s been no secret the Waratahs have kicked to Folau more in the air this season and despite him switching back to fullback, Gibson insisted the same game plan could be employed.

“That’s still an opportunity for us and we’re trying to look for ways that we can involve him and that aerial attack in particular,” Gibson said. “Nothing changes for us there. We’re looking with those contestables for him to claim them forward and really get involved in the game.”

The tone in Gibson’s voice indicates he is still fuming about being held scoreless against the Lions in Sydney, for the first time in any match in the Waratahs’ Super Rugby history.

After four victories on the trot, it was a harsh fall back to reality for the group, who can consider themselves lucky to still be on top of the Australian conference – ahead of the Rebels by three points.

Their opponents, the Auckland-based Blues, have been under far more scrutiny this year.

There have been calls for Blues coach Tana Umaga to be sacked given his team has won only nine matches from 24 starts over the last two seasons.

On home soil and with the Blues well and truly wounded, many believe now is the perfect time for the Waratahs to snap a 36-game streak of Australian losses to New Zealand teams.

While Gibson will be quietly confident the Waratahs can break the drought that extends over 700 days, he was quick to hose down talk of the Blues being completely fallible.

“I’m not buying into that rubbish,” Gibson said. “Everyone has got their challenges and the Blues are going through theirs.

“I look at us. We’re coming off a belting. We’re still working out how that happened and learning the lessons from that and still seething from that. We want to make sure we respond well and we get that opportunity this week.”

With a block of four matches in a row against Kiwi opposition – Blues, Crusaders, Highlanders and Chiefs – Gibson has floated a rotation plan heading into what will be an extremely challenging May.

“I’m going to mix and match,” Gibson said. “It’s around finding the best mix and that’s what I felt was right for this game. We’re entering a really competitive phase of our year and I really want to share that around and give guys opportunity to contribute.”

Waratahs team to face Blues at Brookvale Oval on Saturday