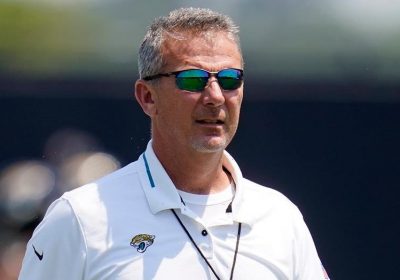 Jacksonville Jaguars coaches Urban Meyer and Charlie Strong made a surprise appearance during All Elite Wrestling’s pay-per-view “Double or Nothing” on Sunday night.

Meyer and Strong appeared to be at their office at TIAA Bank Field as Chris Jericho was battling Maxwell Jacob Friedman in a match between the Inner Circle and Pinnacle factions at the event. In one instance, Jericho brought Friedman to the office and got an assist from both coaches.

Strong gave Jericho footballs to peg Friedman with. “Le Champion” then asked Meyer if he could use his laptop. Jericho then smashed it on the back of Friedman.

Jericho then told the coaches to “have a great season.”

Jericho explained what he thought of the interaction in the post-event media availability, according to the New York Post.

“He was super awesome. And the best part was when we said, ‘Do you mind saying holy s–t?’ And I thought he’d say no, he was like, ‘Yeah, I’ll say it.’ I was like, that’s great. … Like a great action move there’s a little levity. The Urban Meyer scene was great. We played it straight so it’s not ha-ha slap-stick comedy, and he was one of the highlights for sure. It was a lot of fun,” the pro wrestling legend said.

Meyer and Strong appeared to be the perfect tag-team partners for All Elite Wrestling. Tony Khan is the owner of AEW and is the son of Shad Khan, who owns the Jaguars.

Meyer and Strong are in their first season with the Jaguars. The team was 1-15 in 2020.