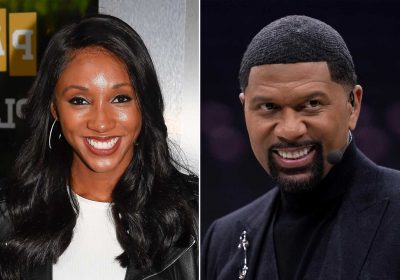 The missing piece of ESPN’s NHL coverage has been solved

ESPN inks another Hall of Famer for NHL coverage

Maria Taylor has a fan in Jalen Rose.

Rose, author of the “Renaissance Man” column and podcast host for The Post, lobbied for Taylor when he told a national audience she should get a raise from ESPN during Wednesday night’s pre-game coverage on “NBA Countdown.”

Ahead of the Suns’ Game 6 elimination win over the Clippers, ESPN analyst Jay Williams was discussing Clippers breakout star Reggie Jackson, who impressed in the postseason. “If you’re great at what you do, you deserve the bag,” Williams said, adding that Jackson “deserves” a big pay day.

“If that’s the case, Maria needs a raise,” Rose replied.

Earlier Wednesday, The Post’s Andrew Marchand reported Taylor is facing a potential breakup with ESPN after she was hoping to make “Stephen A. Smith money.” (Smith makes nearly $8 million annually.)

Taylor turned down an offer from ESPN that would have increased her salary from nearly $1 million per year to almost $5 million at the end of the offer, Marchand reported.

Marchand reported that ESPN sees longevity in Taylor and that she is someone the network wants to keep.

Taylor’s contract expires on or around July 20, so time will tell on how the situation plays out. If the NBA Finals goes seven games, the series will end on July 22.