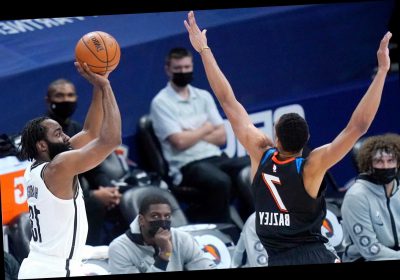 No Kevin Durant? No problem.

After the Nets talked about stealing a game with their star forward resting, this one wasn’t stolen: It was earned.

The Nets kept building momentum with a 147-125 victory Friday in Oklahoma City, tying their highest-scoring regulation output in team history.

“They’re very satisfying every time you can get a win. But any time the whole team played well we can do some great things as a group definitely stands out of the rest,” Kyrie Irving said. “Definitely proud of our guys for competing on both ends of the floor and not letting the foot off the gas pedal.”

Irving had 25 points and seven assists, while James Harden dominated with 25 points, 11 assists and 10 boards. He has three triple doubles and a 6-2 record as a Net.

“They were both incredible. James manages the game so well, spreads the floor, scores, assists, rebounds, gets his hands on balls defensively,” coach Steve Nash said. “Kyrie was just incredible shotmaking. He’s able to make amazing plays with the basketball and it’s such a threat out there it’s difficult for defenses to contain.”

Clearly. Harden’s playmaking made everybody around him better, the Nets’ nine players in double figures matched a team record set back on April 8, 1984.

Joe Harris added 20 points on 5 of 9 from deep. With Landry Shamet (3 of 7) and Timothe Luwawu-Cabarrot (4 of 8) finally hitting from the outside, the Nets shot 57 percent and led by as much as 25 in winning their fourth straight.

“Very, very great. The ball was moving. We were active on both ends of the floor. Coaches drew up a beautiful game plan, and we executed on both ends of the ball,” Harden said. “We like to see carryover, and these last few games we’ve been carrying over. We’ve been playing well — especially on the defensive end — and it’s showing. We’ve just got to keep it up.”

The Nets (13-8) have won eight of their past 10 to leapfrog Milwaukee into second in the East.

Nash juggled his rotations, giving Harden just his second career frontcourt start and defensive-minded Bruce Brown the nod at off-guard to slow Shaw Gilgeous-Alexander. It all came up aces.

The Nets came in having dropped five straight against OKC, but got payback for an earlier season Barclays Center loss on Jan. 10.

“They came to Brooklyn and blew us out, so we had something to prove,” said Brown, who had 19 points on 9-for-11 shooting with five rebounds. “We just communicated on the floor. We were all on a string. We knew what we wanted to do, try to limit Shai’s touches. We knew the game plan and stuck to it.”

The Nets trailed 19-18 after an Al Horford 3-pointer with 4:43 left in the first quarter. That’s when they reeled off an extended 33-8 run, holding OKC without a bucket for 8:08 spanning the first and second quarters.

The Nets forced seven straight misses and four turnovers in that span, seizing complete control and never giving it back.

The Nets scored the first 15 unanswered points to open the second quarter. Jeff Green’s strong drive off a Harden feed made it 51-27 with 8:53 left in the half.

By the time Luguentz Dort snapped the skid, the game was over.

The Nets’ cushion was 76-59 at the break, the second-most they had scored in a first half in their Brooklyn era. And their 115-94 lead going into the fourth quarter was their second-most through three in team history, behind the 120 they hung on San Antonio on March 6, 2020.

“We’re slowly inching forward at both ends of the floor,” Nash said. “We struggled defensively at times, but we’re getting more solid with our game plan defensively, which is important. Offensively, you’re starting to see a little more flow.”

“We’re going to be challenged every night. We’re going to get everybody’s best shot,” Irving said. “But what we’re doing now is just finding a continuity to be able to utilize the strengths that we do have.”