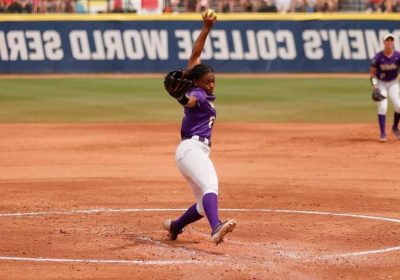 James Madison’s Cinderella run to the Women’s College World Series came to an end on Monday, but fans made sure to let Dukes pitcher Odicci Alexander know how much fun it was to watch her pitch.

As Alexander left the mound Monday trailing No. 1 Oklahoma 6-1 in the bottom of the fifth, fans — both in JMU’s purple and gold and Oklahoma’s crimson and cream — stood on their feet to applaud the redshirt senior.

The Sooners advanced to the College World Series finals with a 7-1 win against James Madison.

ESPN reporter Holly Rowe said after the game she wouldn’t be surprised if Alexander was named the Women’s College World Series Most Outstanding Player. And why not?

Though her team won’t reach the finals, Alexander helped make James Madison the story of the postseason: She threw 1,057 pitches and 64 2/3 of her team’s 73 innings. She pitched to a 2.92 ERA with 66 strikeouts and only 28 walks during the NCAA Tournament run.

In her first game at USA Softball Hall of Fame Stadium in Oklahoma City, Okla. — a 4-3 JMU win — Odicci held the Sooners to just three runs on six hits and two walks with nine strikeouts over eight innings. In her next start, against No. 5 Oklahoma State, she pitched the full seven innings and held the Cowgirls to one run on three hits and two walks with a pair of strikeouts. The 2-1 win against Oklahoma State made James Madison the first unranked team to reach the Women’s College World Series semifinals.

Alexander finishes her career as one of the most decorated softball players in program history. She was named the CAA Pitcher of the Year in 2021 after being named CAA Player of the Year in 2018 and ’19. For her career, she posted an ERA below 2.40 in all four full seasons and racked up 712 strikeouts in 640 innings of work, completing 55 of the 102 games she started. Alexander was also an accomplished hitter, batting over .310 every season and twice racking up double-digit home runs.