They were written off during a nightmare opening month but Joe Tapine says the Canberra Raiders have never wavered in the belief they are genuine premiership contenders.

Tapine admits the Raiders "just didn't turn up" in crucial moments during a winless month to start the year, but those days are long gone for a Green Machine outfit that has learnt how to win ugly. 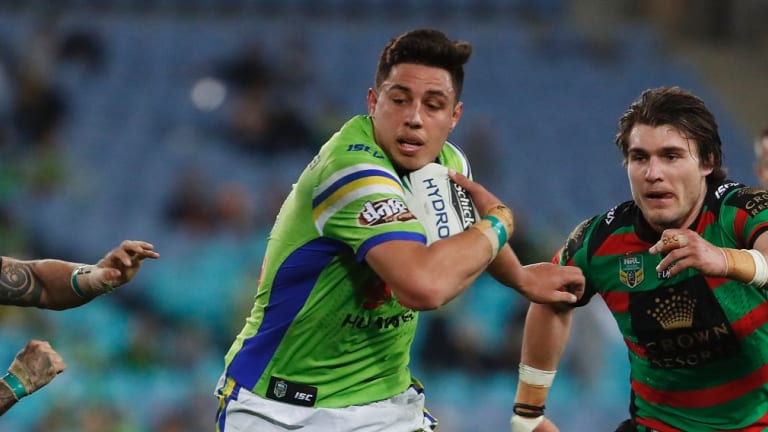 Joe Tapine believes Canberra can be a genuine premiership threat.

Canberra will aim for a third consecutive win when they host the Cronulla Sharks at Canberra Stadium on Sunday.

Tapine will be fine to play if he enters an early plea for a grade one dangerous throw charge for his tackle on Ryan James in the 68th minute of Canberra's win over the Gold Coast Titans last week.

Raiders coach Ricky Stuart wasn't concerned about Tapine's shot on James and neither was the man himself, admitting he "didn't think much of it at the time".

Tapine's likely inclusion is welcome news for a Canberra outfit that has both re-emerged as a finals contender and proven to themselves they can mount a serious charge for the title.

"Definitely, we’ve felt it since the start of the year," Tapine said.

"[We had] a couple of setbacks and games that we should have won, and in some of them we just didn’t turn up. But we’ve been working hard, trying to get back up there.

"Top eight is a big goal for us and even the top four, so we’ve been working really hard just to get our image back.

"Everyone ruled us out and they don’t really think anything of us after a couple of losses but we’re here to prove them wrong and we’re the only ones that can change it.

"There’s always room for improvement and we’re all trying to work on that. There were a couple of a decisions there and a couple of plays we got wrong but we’ll have a look at the video on Monday and we’ll fix that up.

"We’ll be as clean and as squeaky as we can."

Tapine has developed into a damaging 80-minute player on the edge having racked up almost 250 post contact metres with ball in hand, with a tackle efficiency rating of over 85 per cent to boot.

The 23-year-old admits it took time to grasp an understanding on how to rein in his vigorous approach and maintain the intent that saw him labelled a wrecking ball, but he has found the right mix this season.

"It’s just off the back of the boys really, they give me a rest when I need it and the ball when I need to step up," Tapine said.

"I’m just happy playing around the boys that I’m with and I’m enjoying my footy at the moment."