Kaysa Pritchard, the little big man who gave the Eels the edge As Parramatta and the Wests Tigers traded points and the lead like gunslingers at ANZ Stadium on Sunday, you sensed the difference at the end of the night would be a spectacular length-of-the-field try with, say, Bevan French or David Nofoaluma scoring in the corner, in the dying minutes, with a kick from the sideline after the siren to win the match for either side.

But no. Footy isn’t always like that. The result often comes down to a loose carry, a devious hand, a 50-50 penalty, how good the pizza is in The Bunker that night. 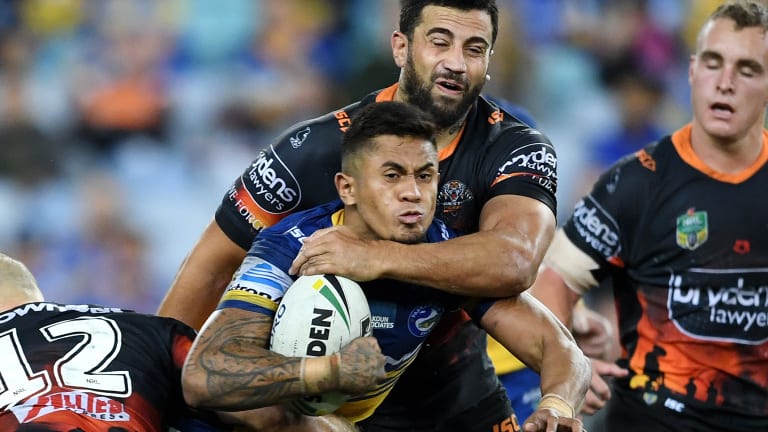 Defying gravity: Kaysa Pritchard makes up for size with everything else at his disposal.

This match was ultimately determined by a little big man called Kaysa Pritchard and the play was simple and beautiful all in one.

With two minutes to go, with the Eels holding on 24-22 and their second win of the season agonisingly close, Tigers forward Josh Aloiai (189cm, 110kg) came charging through the middle of the ruck.

He ran at Pritchard (175cm, 80kg). The Tigers’ big men had been running at him all afternoon and Pritchard had given it back to them, with interest. Aloiai ran, Pritchard whacked and the ball popped out. The game was over.

Pritchard limped away. He missed a large chunk of last season with a knee injury before making a shock return for the elimination final against the Cowboys.

He’s had his issues over the last few years, most of them off the field. He’s off contract at end of this year and there was speculation only a few weeks ago, as the Eels struggled to find a win, the club might shuffle him on.

Park all that for an moment.

Pound for pound, he was the toughest player on the field on Sunday. Anyway you looked at it, he was the best at full-time.

What you didn’t see was what came next inside the Parramatta dressing-room.

“He worries about his game too much,” Eels coach Brad Arthur said. “He came straight into the sheds and apologised for a few things he got wrong. That’s a good thing that he wants to give 100 percent. He gained some confidence off the back off last week. He’s erratic but that’s him.”

While the Pritchard pinball was pinging out of dummy half, bumping and bouncing off rival players, his brave defence despite his stature was there for all to see.

In the first half, he lined up Tigers veteran Chris Lawrence and hit him so hard the ball came loose. He smashed Tigers halfback Luke Brooks just as he was passing the ball, knocking the NSW hopeful into the middle of next week.

Asked if Pritchard needed to temper his kamikaze approach, Arthur said: “That’s what we’re trying to work with him on. We can’t afford for him to not get through games. He’s got to channel it the right way.”

Sitting next to Arthur was captain Tim Mannah, who defends next to Pritchard in the defensive line. “Tough kid,” Mannah smiled.

It feels strange discussing defence when the hallmark of this match was a flood of points in the second half. 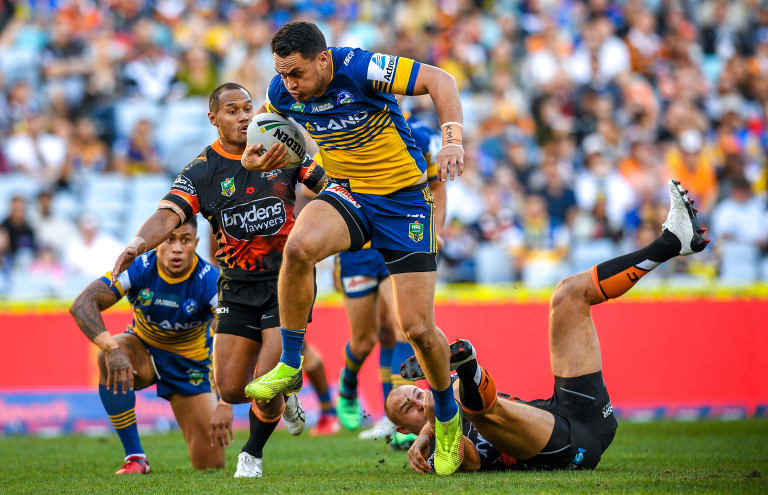 The Eels led 12-10 at halftime and rightfully so. They looked the better side, they looked most likely because the Tigers struggled at times to hold onto the ball, but when Tigers five-eighth Benji Marshall steamed onto an offload from Mahe Fonua and scored with 15 minutes to go it seemed the match would turn their way.

The ball looked like it had spun out of Marshall’s hands as he scored. Over to you, Ashley Klein, in The Bunker.

“He regained it with a squeeze,” Klein said.

There has been early optimism around the Tigers this season and the poster boy of hope anew has been Marshall.

The Benji we all remember most, though, can be defined by one single play and it happened right here on this same patch of turf 13 years ago in the grand final against the Cowboys, when he ran 70 metres and then flick-passed for Pat Richards to score.

Against the Eels, he was brilliant but then patchy. Two kicks early in the tackle count in the second half gifted Parramatta easy field position.

It summed up the Tigers’ day.

“I don’t usually get frustrated,” Tigers coach Ivan Cleary, who usually has the emotion of a dial tone, said. “But today I was frustrated.”