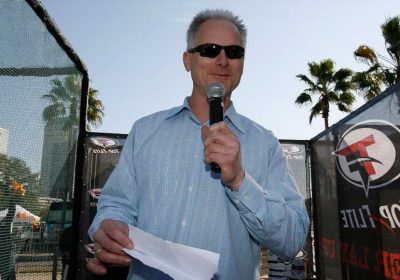 Kenny Mayne participated in his final show for ESPN on Monday night.

The long-time ESPN host, who had been with the company for 27 years since a legendary letter led ESPN executives to hire him in 1994, went out in style with a fittingly fun “SportsCenter” sign-off that featured a lot of entertaining guests.

Aaron Rodgers, Marshawn Lynch, Sue Bird and Jamal Crawford were some of the notable guests to join Mayne, and he certainly had fun with them. Each interview had fun soundbites but also saw poignant moments from the athletes being interviewed.

In addition to discussing his relationship with the Packers, Rodgers talked about being a fan of Mayne — before Mayne blasted Rodgers for getting him into the cryptocurrency market.

As great as the ending of the Rodgers interview was, Mayne getting Lynch to discuss what he would do if he encountered aliens was a top-tier moment as well.

And each of the athletes took time to explain what Mayne meant to them. Lynch’s moment may have been the most tear-jerking of all when he thanked Mayne for “helping people understand that I was an all right individual.”

As expected, Mayne’s final sign-off from “SportsCenter” was a good one too.

We’ll soon see what exactly will come next for Mayne, but clearly he appreciated his time at ESPN and took time to thank everyone in a tweet after his final show.