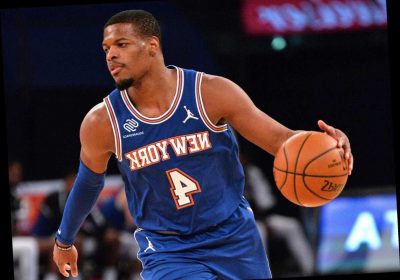 One of the big reasons behind Knicks rookie’s rapid rise

Knicks guard ‘getting there’ after knee injury

Smith has been available but hasn’t played in the Knicks’ past six games and in 9 of 10 overall. He has totaled just 10 minutes in two appearances earlier this month since returning from a quad injury.

The Westchester Knicks are scheduled to open their 15-game Disney bubble slate on Feb. 10.

Starting small forward Reggie Bullock says the neck injury that has kept him out of the past three games is unrelated to the surgery he underwent before the start of last season.

Bullock participated with contact in practice on Saturday and he’s questionable for Sunday’s game against the Clippers (15-5) at the Garden.

“I definitely have improved,” Bullock said. “I’ve been inserted back into practice and practice has been going well. … Hopefully I wake up [Sunday] and feel a lot better and possibly try to give it a go. But I’m feeling a lot better and headed in the right direction.”

All-Stars Kawhi Leonard and Paul George returned to the Clippers’ lineup Friday against Orlando after sitting out two games apiece due to COVID-19 protocols. Leonard is averaging 25.4 points per game, with George just behind him at 24.0.

“Those guys are two great players in our league, so it will be an extreme challenge for us,” Julius Randle said. “We’re up for the challenge. We had a great practice [Saturday], and we’ll be ready for it.”