Knicks’ Tom Thibodeau could be eyeing reunion with Zach LaVine 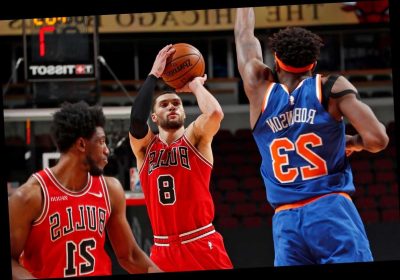 Knicks may soon have their own Big 3

As president/coach of Minnesota, Tom Thibodeau once dispatched Zach LaVine to Chicago in a 2017 trade for Jimmy Butler.

But the Knicks coach sounded like he wouldn’t mind reuniting with the current Bulls shooting guard, noting his improvement. There’s speculation the Bulls would put LaVine on the trading block before he becomes a 2022 free agent. That could be before March’s trade deadline, this summer or at the next trading deadline.

The Knicks need more scoring and LaVine is a sniper — one of the best dunkers in the NBA. He’s averaging 26.8 points and 5.3 assists. SNY reported over the summer LaVine would be on the Knicks’ radar.

The biggest edge the Knicks would have over many teams interested is they have $18 million in cap space to absorb a big contract without giving away much salary. He’s one of many players on the Knicks’ radar, sources contend. Bulls owner Jerry Reinsdorf could be hesitant to deal LaVine to Thibodeau considering his Bulls’ breakup was ugly.

Before Monday night’s 110-102 loss to the Bulls, in which LaVine scored 21 points on 8-of-16 shooting with five rebounsd, Thibodeau was asked about LaVine’s progression since he dealt him out of Minnesota. Ironically, Butler’s addition to Minnesota created friction with the young players and led to Thibodeau’s dismissal two years ago.

“He’s continued to grow I think each year,’’ Thibodeau said. “I think sometimes we tend to forget the steps that players take to get to the point to where they are today. and for Zach, he started off, I think he scored around 13 or 14 points a game his first year. Then there was another four-point jump. Now he’s up to 26, 27. He’s shooting 50, 40, 90. He’s an elite shooter. He’s a great athlete. … But he’s a great guy, a hard worker. So you knew he would continue to improve. He’s playing at a very high level.’’

The Knicks also have a trove of draft picks to deal, including two first-round picks this year.

Bulls first-year coach Billy Donovan recruited Julius Randle when Donovan was at Florida. Randle chose Kentucky. Now, Randle is having a career year and shooting well from the 3-point line (37.5 percent) and may be on the verge of making his first All-Star team.

“Thibs is putting him in situations playing to Julius’ strengths,’’ Donovan said. “He’s a handful in the low post. He’s got great feet and ball-handling ability. He’s worked hard on his shooting. He’s shooting the ball much better. Earlier in his career he’s a guy you left alone and try to jam the paint. Now he’s making midrange, 3s, puts it on the floor. He’s a heckuva driver…. He continues to evolve and grow as a player.’’

Donovan coached Knicks backup center Nerlens Noel the last two seasons at OKC. Like Randle, he also recruited Noel but lost him to Kentucky. Noel, who signed a one-year, $5 million deal with the Knicks in November, missed his second straight game with knee soreness.

“I loved him,’’ Donovan said. “I recruited him coming out of high school. A lot of these NBA guys I never got. He’s a terrific teammate and love the way he plays the game with great shot-blocking ability. He sees the floor well for a big guy. He was great for us at OKC. He gave us an incredible two years there — all about the team.’’