Canterbury's final hopes may have been buried with a controversial penalty call at Suncorp Stadium that condemned them to a last-gasp defeat at the hands of the Brisbane Broncos.

With scores locked at 20-20, Dogs fullback Moses Mbye was sinbinned for a professional foul on Darius Boyd as the Brisbane captain chased a James Roberts kick into the in-goal. 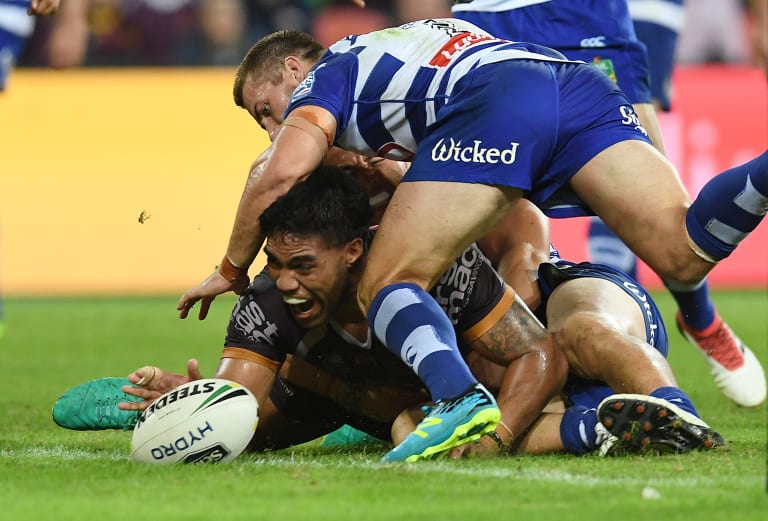 Power play: Joe Ofahengaue crashes over for the Broncos on Thursday night.

Boyd immediately appealed for the penalty and Mbye was ruled to have impeded the chase. He was marched from the field before Jamayne Isaako slotted over the matchwinner on the stroke of fulltime to give the Broncos a 22-20 victory.

Replays showed Mbye did make contact with Boyd but it's debatable whether he held back his opposite number. What seemed destined for a drop-out and extra time then became a routine penalty kick from in front of the posts.

Referees have been far more willing to use the sin bin this season and professional fouls are now back on the radar for officials. Whether they got it right on this occasion will no doubt occupy the NRL news cycle until the next questionable decision across the weekend.

Either way, this was a game the Bulldogs looked to have every chance of stealing. They were up by six with 15 minutes to play and Brisbane down on numbers after star youngster Payne Haas was sent to La-La Land by Bulldogs big man David Klemmer.

Haas will never forget his NRL debut. He'll be lucky to remember anything about the sequel after being levelled by Klemmer and stumbling off the ground with assistance from medical staff.

His 20-minute cameo last week was the talk of the code but he could only manage six minutes in his second outing. Hundred-gamer Klemmer lined him up the moment he set foot on the field and would win the battle on this occasion.

Haas made it to his feet but was so unsteady he needed to be held upright by Raymond Faitala-Mariner and Andrew McCullough before trainers arrived to escort him down the tunnel. He was no chance of returning and may yet miss a week given the severity of his symptoms.

Brisbane looked flat in the first half and trailed 14-6 at the break. This looked to be the win the Dogs so desperately needed but some wizardry from Anthony Milford ensured Brisbane got themselves back into the contest soon after the resumption of play.

Canterbury were left fuming when Isaako seemed to drop the ball in front of his posts but it was ruled a knock-back. Soon after he was slotting a penalty at the other end of the ground that would prove vital in the end.

Klemmer's performance came at a good time with Origin selection around the corner but it was a tough night for Boyd, who is playing like a man without confidence, fumbling a number of balls and clearly frustrated with his efforts.

He will likely win a Maroons wing spot but knows he will have to fire to keep Valentine Holmes on the sidelines.