Smith was left doubled over in pain early in the second half as Latimore rose from a tackle and appeared to catch the Storm skipper in the genitals, triggering a bizarre sequence of events as the Dragons emphatically stamped themselves as premiership favourites. 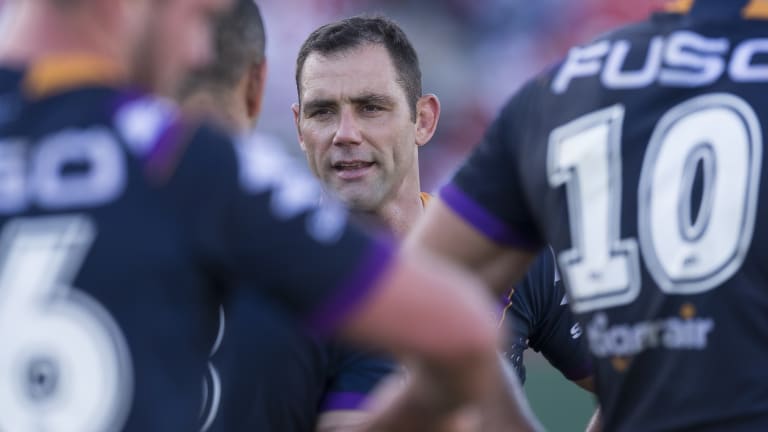 Melbourne were left without a marker in defence as Smith sought attention, NSW hopeful Cameron McInnes taking full advantage to burrow over and pad a Dragons lead they never looked like surrendering.

The table-topping Red V turned the eight-point cushion into a 34-14 romp to vault clear of the Warriors at the top of the NRL ladder, but Smith made it known he was none too pleased with the incident in the post game press conference.

While stopping short of calling it a deliberate act, Smith suggested there was no accident about Latimore's contact.

Referees Matt Cecchin and Chris Butler didn’t penalise Latimore, who later tried to apologise to Smith at a subsequent scrum.

Asked about it, Smith said: “I got hit in the very, very sensitive parts. I thought I was in a position in the tackle where I can't get caught up in any stray elbows or knees, put it that way.

“I can't remember ever falling off a tackle in that position that close to the tryline. I don’t think I ever have in my entire career. The referees obviously didn't see anything and didn't feel like there was any foul play so that's the way it went.”

Smith was in obvious pain for several minutes afterwards, but Latimore was quick to defend his actions.

“You can look at my history and it's not in my nature,” Latimore said. “At the time I was trying to get a quick play the ball and Cam obviously tried to slow the play the ball down a fair bit.

“I think I was fighting in the play the ball and something happened when he was on the deck. I did try to apologise to him at the scrum, but he was in a fair bit of pain and hopefully he's OK.”

Smith managed to finish the match despite also limping after from a heavy hit from NSW hopeful Jack de Belin in the first half.

Josh Addo-Carr bagged all three of Melboourne’s tries, but the Dragons rode a frenzied 19,000 plus crowd at Jubilee Oval and Gareth Widdop’s faultless boot to confirm their premiership favouritism.

Widdop racked up 18 points from five penalty goals and four conversions as the match swung on two huge calls either side of the break.

Addo-Carr had a try disallowed on the cusp of half-time as Cecchin halted play for an earlier infringement against the Dragons in the play-the-ball, prompting Smith to quip to the whistleblower “that’ll do me”.

The Dragons went down the other end of the field on the next set after Cameron Munster was denied a try for a double movement and potted a penalty goal to extend their half-time lead to eight.

“It was a really, really strange one today,” Smith said. “To me do we go on and win the game if we score? I'm not sure, we may not have.

"But it was a pretty crucial part of the game. If we score a try it is a guaranteed four points and if we kick a goal it's six. It's a six or eight point turnaround to the Dragons.”

Added Bellamy: “It's probably the rule, but I'm thinking if the infringement happens before you might pretend you didn't see it. It might be an advantage to us later in the year, I don't know. The referees have probably got it right.”

And the Dragons have got plenty right in the opening two months of the season.

The Storm blazed their way through the first nine games of last year and finished the season as premiers.

Put to Dragons coach Paul McGregor his side looked every bit the same title material, he sheepishly looked away.

“I’ve said this before so it’s not new, but we’ve done some good things before and we’ve learned from last year what we didn’t so good,” McGregor said. “If we keep it pretty simple and play the way we are for one another, who knows? But it’s only early.”