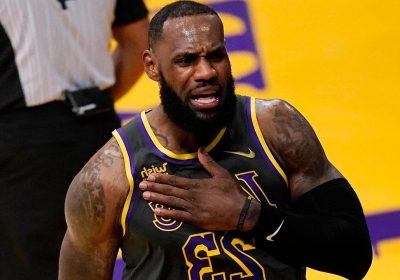 LeBron James and the Los Angeles Lakers will be taking on the Wizards in Washington D.C later this month, but the defending NBA champions aren’t expected to visit the White House.

The Lakers, who won the NBA title over the Miami Heat in the bubble in Orlando last season, won’t visit President Biden when the team travels to Washington, according to multiple reports, but the team hasn’t ruled out a visit in the near future.

The reasons why the Lakers won’t be able to go visit Biden is due to the league’s COVID-19 protocols, as well as the timing of their schedule. Los Angeles will play the Orlando Magic on April 26 before its game against the Wizards two days later. On April 30, the Lakers will head back to Los Angeles to take on the Sacramento Kings.

Typically champions from the NBA, NFL, MLB, and NHL all visit the White House during their respective league’s offseason or if they have a road trip in the Washington D.C. area during the regular season.

The last time an NBA champion visited the White House was back in 2016 when James led the Cleveland Cavaliers to their first title in franchise history. The Golden State Warriors won titles in 2017 and 2018, and the Toronto Raptors claimed their championship in 2019. None of those teams visited President Trump at the White House.

The Lakers claimed the 2020 NBA title in October, but they still haven’t had their championship parade in Los Angeles because of the coronavirus pandemic. If Los Angeles manages to win back-to-back championships, the team may have to hold two parades this upcoming summer.