Lindy McDaniel, an All-Star reliever who appeared in nearly 1,000 major league games over 21 seasons, has died. He was 84.

Bill Chambers, longtime friend and fellow elder at the Lavon Church of Christ in Lavon, Texas, said McDaniel died of COVID-19 on Saturday night at an acute care facility in Carrollton, a Dallas suburb.

Steady as a long man and closer, McDaniel pitched in 987 big league games, trailing only Hall of Famer Hoyt Wilhelm when he retired in 1975. 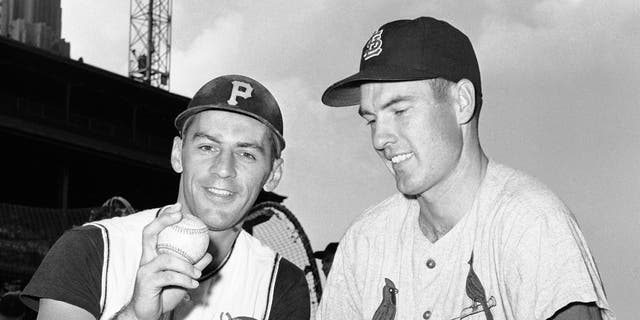 In this Aug. 11, 1960, file photo, shortstop Dick Groat, left, of the Pittsburgh Pirates, and pitcher Lindy McDaniel, of the St. Louis Cardinals, talk at Forbes Field in Pittsburgh. (AP Photo/File)

McDaniel debuted with the St. Louis Cardinals as a 19-year-old in 1955 and won 15 games as a starter two years later before transitioning to the bullpen for the bulk of his career. He led the majors with 27 saves in 1960, earning an All-Star selection and tying for third in Cy Young Award balloting with Cardinals teammate Ernie Broglio behind winner Vern Law and runner-up Warren Spahn.

The lanky right-hander pitched eight seasons with St. Louis and six with the New York Yankees, and also appeared for the Chicago Cubs, San Francisco Giants and Kansas City Royals. He finished his career with a 3.45 ERA, 174 saves and a record of 141-119 despite playing for mostly mediocre teams. For all his success, McDaniel never appeared in a postseason game.

McDaniel became a Christian minister in retirement and preached in his hometown of Hollis, Oklahoma, and later in Texas.

Kathi Watters, his daughter, said he had been ill for about four weeks. He had been an elder at the small Lavon Church of Christ for 12 years and preached there one or two times a month. Funeral details were pending.