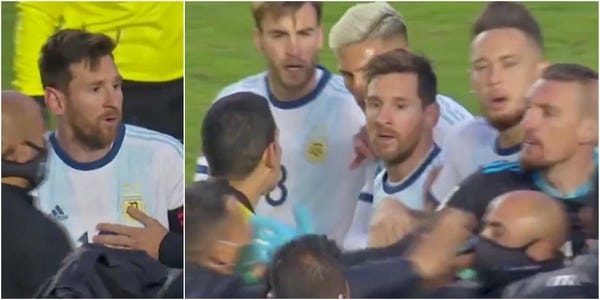 Lionel Messi was involved in a furious bust-up with a member of Bolivia's coaching staff after Argentina's victory in World Cup qualifying on Tuesday, allegedly calling him a "c—."

The FC Barcelona star was unhappy at Nava shouting at him from the touchline throughout the game.

'The c– of your mother. What's up baldy?" Messi said to Nava afterwards, according to Sportsmail. "You were screaming the whole game. What are you doing? From the bench you are yelling at me the whole game."

Navas, an Argentine himself, spoke to the media after and said he was "hurt" my Messi's comments, however the spat would not change his opinion of the 34-year-old forward.

"I grew up watching Messi play, he is the greatest thing there is. I admire him so much that my youngest son is named Lionel after him," Navas said, according to Red Gol.

"It hurt me that my children heard how they talked about me, I think everything got bigger than it really was. What mortified me the most were the messages I received."

"What happened does not change my way of thinking about Messi."

Argentina's victory on Tuesday night was the first time La Albiceleste had won away in Bolivia in 15 years.

The visitors went behind in the 24th minute, however Inter Milan striker Lautaro Martinez equalized just before half time, before Lazio's Joaquin Correa netted the winner with 10 minutes to play.